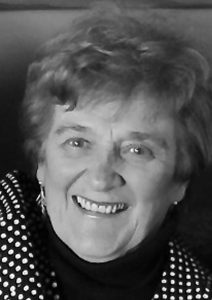 ANNE GIBBONS, beloved wife of the late Earl Gibbons, passed away peacefully at the Chinook Regional Hospital, on Wednesday, October 10, 2018 at the age of 84 years. This marks the end of the life of a gracious, gregarious and drop dead gorgeous gal.

Anne Rita Gibbons was the only daughter and first Canadian child born April 20, 1934 to Peter and Katia Boras of Vitina, Herzegovina. Her brothers Ivan (Doris), Walter (Ancica) and Michael (Helen) had travelled with their mother from Europe the year before to a prairie homestead where Peter had worked for five years to bring his family a more hopeful future.

Anne’s early life in a prairie farming community shaped her, as she in turn shaped her community her entire life.

From necessity in the dust bowl, depression, and war years of her childhood, she lived and understood the importance of family, of community, of hard work, of optimism and when one couldn’t find it in themselves to be optimistic, of faith. Anne learned to be creative – flour bags became fashion in her hands; even luncheon meat became a gourmet meal to feed her family and anyone else who walked through the door.

When she was the subject of rejection as the ‘other’, the immigrant kid, her competitiveness, her smarts, her perfectionism, and her irrepressible spirit became strengths that endured throughout her life.

Earl Gibbons was strategic in his bid on that most desirable shoebox at the Iron Springs dance hall’s midnight lunchbox raffle. Anne and Earl danced through 53 years of marriage. Earl thought he was the luckiest man alive… and the best fed.

Together they endured the fear and uncertainty of entrusting the life of their son to open heart surgery in its early days; the alternative was certain death from a congenital heart defect. They were supported by their community and their church at a time before Medicare had been introduced by the CCF. It was a lifelong political puzzle that Anne voted Liberal in every election but the last.

Anne was incredibly proud of her children Greg (Daniele), systems analyst, Jeannette (Dave) family practitioner, Donna (Kevin) midwife and nurse practitioner, and Lawrence (Ritchie) high energy physicist, and their children and grandchildren. She was a role model for her daughters in particular, working throughout her marriage at a time when women were supposed to be happy enough at home.

The Butte Dress Shoppe was her fifth baby, and one in which all her energy, skill and talent came together. She had an eye for beauty and fashion where no one had ever thought to look before, and Picture Butte became the place for graduation and wedding gowns, or the perfect pair of jeans, for all of southern Alberta.

After the Dress Shoppe closed and even more after the death of her beloved Earl in 2006, Anne channeled her energy into her community, organizing projects to reveal and share the beauty of her prairie home. The Walk on the Wild Side is now an unexpected refuge for swans, pelicans and early morning walkers.

In her last years, Anne opened her heart and home to others. She destroyed the tradition of hoarding secret family recipes, sharing her skills at kifle baking, even when that threatened its value as a bartering tool and currency in Picture Butte.

Anne was always ready to celebrate life with thoughtfulness and generosity. The first thing she mumbled after the stroke that eventually led to her death was instructions to mail the fire truck to her great-grandson in time for his second birthday. The second was a set of instructions on how to bake the pies in her freezer for a friend in need.

Her last act was pure rascality, making a snowball for another hospital inmate to throw strategically. Good gracious, Mom. We will miss you.

To tell a story about Anne’s life, please visit www.cornerstonefuneralhome.com