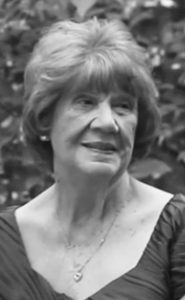 JOLAYNE JOZSA, beloved wife of Alexander Jozsa, of Lethbridge, passed away at the Chinook Regional Hospital, on Friday, October 12, 2018 at the age of 88 years.

Jolayne was the loving mother of two children: Cindy (Wayne) of Lethbridge and son, as well as four grandchildren and one great-grandson. Jolayne was predeceased by her parents, Steve and Elizabeth Molnar, and sisters Violet and Beatrice.

Born in Raymond, Alberta on September 8, 1930, Jolayne attended school in Barrhill. After graduation, she helped out on the family farm in the Iron Springs area. Jolayne’s first job was at the Smart Hat shop in Lethbridge, where she met her husband Alex. Alexander’s first intention was to buy a Stetson Cowboy hat, but after buying the hat, Alex decided to ask Jolayne out on a date. The couple would spend many hours talking in Henderson Lake park. After a short courtship, the couple were married on November 5, 1953 and were together for 64 years.

Jolayne spent her life in Wrentham on the family farm until the age of 85 years old. She was a magnificent cook. Her specialty was the family’s favourite dessert, her delicious chocolate cake. She was a devoted wife, mother, grandmother and partner on the family farm. She cherished her special time with her four grandchildren. Jolayne was an active member of the Wrentham Community Church and involved herself in many church functions. Her hobbies consisted of collecting poems, crocheting, embroidery and shopping.

She will be greatly missed by her family and special pet, Angel.

One Condolence for “JOZSA, Jolayne”