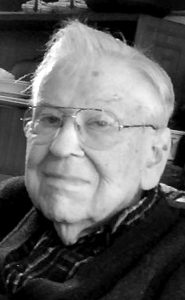 Beckel, William Edwin, B.A., M.S., Ph.D. – Died peacefully, at home at Maison Senior Living in West Vancouver, BC., October 15, 2018 at the age of 92. William lived a long, adventure-filled life. His journey as life-long learner, scientist, educator, leader, husband, father and grandfather influenced those who came to know him for his loving, generous nature, his profound curiosity and his wit. Pre-deceased by his brothers John and Robert, he is survived by his wife of 65 years, Dorothy, his son John (and his daughter-in-law Carol and grand daughter Molly) and three daughters: Margaret (son-in-law Stan), Julia and Millie. William, a.k.a., Bill, was born April 11, 1926 in Kingston, Ontario. He was the son of Elmer Ernest Beckel of Oshawa, Ontario and Beatrice Mary (Driver) Beckel of Kingston, Ontario. His early years were spent in Branford, Ontario, where his father owned a Chevrolet Oldsmobile dealership. With the Great Depression of the 1930s, people stopped buying cars. William’s father paid all his debts and the family moved back to Kingston, his father finding work as Quartermaster at Collins Bay Institution “Preferred Class Penitentiary”. His mother, Beatrice, earned extra money in the summers for the family by operating a tea room from their home in Collins Bay with Bill and his brother Rob acting as servers. William’s education was extensive. He began his education at Kingston Collegiate and Vocational Institute. From there, he attended Queen’s University, graduating in 1949 with a B.A. He gained his master’s degree at the State University of Iowa in 1953. Two years later, he received his PH.D from Cornell University. William was a Research Scientist for the Defence Research Board, Ottawa and Department National Defence in Fort Churchill, Manitoba, from 1948-1955. It was here that he met his life partner and scientist, Dorothy. He then worked at the Canadian Department of Agriculture before becoming Assistant, then Associate, Professor at the University of Toronto from 1956-64. He was Full Professor and Dean at Scarborough College at the U of T from 1964-68, then Vice-President, University of Lethbridge, in Alberta, from 1968-72 and President, University of Lethbridge from 1972-79. William finished his career as President of Carleton University in Ottawa, Ontario from 1979-89. From there, he and his wife, Dorothy, retired in Vancouver B.C. Along the way Bill was a member of numerous scientific, professional and education societies and the author of over forty scientific and educational publications in juried national and international journals. Dr. Beckel was a zoologist and an early proponent of the use of television as a teaching medium. In 1964 he became the first dean of the University of Toronto-affiliated Scarborough College, which led an experiment in teaching half the courses using TV-only lectures. At the University of Lethbridge as an approachable and interested President, he was often seen chatting with students in the concourse. There he oversaw the construction of the new campus and the implementation of Management Arts, Native American Studies, and the expanded Cooperative Education program. Under Dean Russell Leskiw, the Education program became one of the best in Canada. A highlight during Dr. Beckel’s presidency was the provincial government’s approval of the Centre for the Arts, a building that allowed for the creation of the U of L’s art collection. Like many Ontario universities at the time, Carleton was in financial trouble when Dr. Beckel took the helm in 1979. That year it was running a $1.5-million deficit. He oversaw several controversial faculty buyouts, and in 1980, the school had to dip into academic scholarship funds to help cover its debts. Dr. Beckel’s efforts during the 1980’s eventually pulled Carleton out of the red and into a building period that resulted in a new student residence, a new library, a Life Sciences Research Building, an Art Gallery, a Social Sciences Research Building, a Day Care Centre and the beginning of a new engineering complex. Unlike Carleton’s rival universities, most of whom were raising admissions standards to compete for better students, Dr. Beckel decided to keep Carleton open to high-school graduates with averages as low as 60 per cent on the premise that “every student should have the right to fail”. The benefit of this philosophy was that first year enrolment increased bringing with it increased tuition revenue that more than offset the impact of a lower retention rate. This egalitarian philosophy combined with tough financial controls resulted in a strong financial position for the university and made it a “rare chance” university. For many students, Carleton offered a rare chance at a university education. On July 1, 1989, the same year he received an honorary degree of Legum Doctoris from Carleton, Dr. Beckel was succeeded as president by Robin Hugh Farquhar. Previously that same year Dr. Beckel received an Honorary Degree from Ottawa University. In 1995 Dr. Beckel was awarded an honorary degree from the University of Lethbridge. William enthusiastically enjoyed his family, his friends, cooking, wine, cheese, music, hunting, and skiing. In lieu of flowers donations may be made to the Whistler Ski Patrol. Email wbpublicrelations@vailresorts.com. Indicate in the subject: “Make a Donation to the Ski Patrol”. They will respond with details. Celebration of life will be held in North Vancouver on November 24th, 2018. Time and Location to be announced. For up to date details and sending condolences please go to: https://www.dignitymemorial.com/ en-ca/funeral-homes/north-vancouver-bc/first-memorial-funeral-services/3801