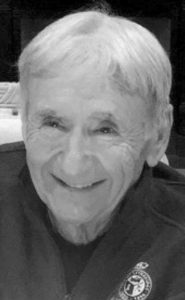 It is with great sadness that we announce the passing of Ron Julius Peta, beloved husband of Venancia Peta, on Thursday October 25, 2018 at the age of 82. Besides his loving wife Venancia, Ron is survived by his daughter Charlene Kocken (Dan Sullivan); his son Ron Peta (Linda Peta); his four grandchildren Brittany Sperling (Travis Sperling), Courtney Kocken, T.J. Kocken, Liam Peta, and his sister Lorraine McCormick (Dr. Peter McCormick). Ron was predeceased by his parents, Julius and Helen Peta, and his brother Lawrence. Vigil Rites (Prayers) will be held at 7:00pm, on Friday, November 2, 2018 at MARTIN BROTHERS RIVERVIEW CHAPEL, 610 – 4 Street South, Lethbridge. A Celebration of Life will take place at 12:00pm, Saturday November 3, 2018 at ST. MARTHA’S ROMAN CATHOLIC CHURCH, 355 Columbia Blvd West Lethbridge. In lieu of flowers, donations may be made to the ALS society of Alberta, 7874 -10 Street SE, Calgary, Alberta T2E 8W1.