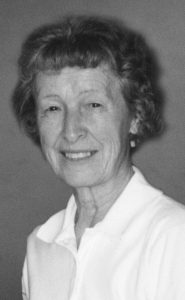 MARY ETHEL PETERSEN, beloved wife of the late Norman Charles “Bud” Petersen, of Lethbridge, AB, passed away peacefully on Friday, October 26, 2018 at the age of 95 years.

Born in Mislava, Czechoslovakia on August 2, 1923, Mom immigrated to Canada in 1929 with her mother and four siblings to join father John in Lestock, Saskatchewan. Hard times followed with all family members pitching in with farm work and family care. Mom and sister Margaret moved to Lethbridge in 1943 and found work at the Café in the Greyhound Bus Depot. There she met a dashing young member of the Royal Canadian Air Force. Mom and Dad were married in November of 1945 and moved to the Petersen family farm in 1946 when Dad was released from military duties. Wayne, Rand and Lonny came along in the early 50’s. Mom worked hard as a farm wife and mother looking after her “boys”. She was active in the Wrentham United Church as a regular attendee, volunteer, and choir member. Schooling requirements convinced Mom and Dad to move to Lethbridge in 1965. Mom carried on her church affiliations with McKillop United. The challenges of farming from Lethbridge for ten years resulted in sale of the farm in 1974. Dad fell ill in the spring of 1975 but that presented an opportunity for Mom and Dad to become snowbirds to Mesa, Arizona for the next 20 years. Dad’s health issues ended the annual Mesa pilgrimage and Mom and Dad remained in the same house as they had purchased in 1964 until a move to the Good Samaritan’s Park Meadows Village occurred in 2007. They both blossomed there as care issues were handled by others. Dad passed in 2008 and Mom moved to the Cottages at the Good Samaritan’s facility when her own health issues challenged her independence. She enjoyed sing-songs, card bingo, and day trips for shopping and luncheons during her time at Park Meadows.

The family would like to extend a very sincere thank you to the management and staff at Good Samaritan’s Park Meadows Village and Dr. R. Strank for the excellent care provided to Mom.

A Celebration of Life will be held at MCKILLOP UNITED CHURCH, 2329 – 15 Avenue South, Lethbridge, AB, on Saturday, November 10th, 2018 at 1:00 P.M. with Reverend Terry Shillington officiating.

In lieu of flowers and in memory of Mary, donations can be made to Good Samaritan Park Meadows Village, 1511-15 Avenue N, Lethbridge, AB, T1H 1W2.