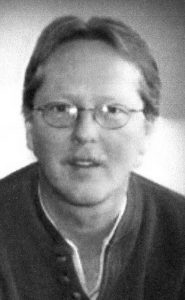 Danny, beloved son of Dianne Skretting, passed away at St. Michael’s Palliative Care Centre on Thursday, October 25, 2018 at the age of 53 years. Danny was born and raised in Lethbridge and after high school he became involved in the automotive industry. He attended technical school and became a Journeyman Partsman in his early 20’s. He worked for Ford Motor Company for many years and was then employed by Davis GMC Buick in 2005, became Parts Manager in 2007 and remained in that position until 2013. Following that, he worked the parts desk until 2016 when his illness forced him to go on long term disability. Dan always said working for Davis was the best job he had ever had, he loved it! Dan had a three year battle with liver disease which he fought with dignity, humor, love and compassion until the very end. Dan had a love of fast cars and owned many hot rods over the years. He also had a love of guitars, playing and owning many over the years. He also built guitars and his family will always cherish his creations. He had a wicked sense of humor that left us laughing many, many times and he was an avid lover and owner of cats and dogs all of his life. Besides his loving mother Dianne, Dan is survived by his cherished daughter Shyla (Keith Madge) Caldwell; grandsons Aidan, baby Chase who was born on October 23, 2018; his devoted sister Karyn (Jeff) Jarvis-Mehrer and equally devoted brother Jeremy Reierson; treasured niece Chelsea Jarvis and her boys Trey, Tripp, and Jett who adored Danny; special nephew Tyler Jarvis; fiancé Lisa Todd whom he loved dearly; brother-in-law Bryan Calpas and his father Ken Skretting of Cranbrook, BC. Dan was predeceased by his sister Denise Calpas; grandma Julie Doucette; grandparents Hans and Mary Skretting and brother-in-law Ken Jarvis. Dan left this world with a great legacy, he loved people and they loved him. He never made an enemy and his kindness, compassion and loving nature will be missed by many. Rest in peace Danny Boy (as he was affectionately called by his family) you are now mended and free from pain. We will always miss your kind, loving soul but it brings us peace to know you are now reunited with your sister Denise. A Celebration of Dan’s Life will be held from 2:00pm – 5:00pm on Saturday, November 3, 2018 at the ROCKY MOUNTAIN TURF CLUB GRANDSTAND, 3401 Parkside Drive South, Lethbridge, Alberta. Please come and share memories of Dan with us. For those who wish, memorial donations in Dan’s name may be made to the Last Chance Cat Ranch, Box 30025 Park Place, Lethbridge, Alberta, T1J 1X3.

One Condolence for “SKRETTING, Danny”