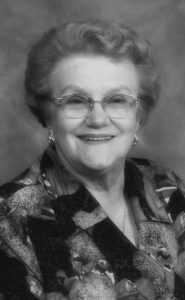 ROSE STANKO (the Steak Lady) passed away on Sunday, October 28, 2018 at St. Therese Villa in Lethbridge, 16 days before her 90th birthday.

Mom was born in Raca, Czechoslovakia on November 13, 1928 to Paul and Agnes Trncik. She immigrated to Canada with her family in 1938 and settled in Onoway, Alberta where they began to farm. Life was very tough for them, clearing the land and enduring the harsh winters. A few years later, the family moved south to the Barrhill area near Picture Butte. Some of Mom’s jobs in Lethbridge included being a top egg grader and later working at the El Rancho Hotel as the head girl in the banquet rooms. She married Andy Stanko in 1948 and they lived at the Stanko family farm near Readymade. In 1960, they bought their own farm in Lomond where Dad did the farming and Mom took care of the cattle. In 1969, along with the farming, they also started to manage the Shaughnessy Hotel for the estate of Grandpa Stanko. Dad’s sudden passing in 1973 changed Mom’s life forever. Rick came back to run the farm which allowed Mom to continue to run the hotel, which she purchased in 1975. Being a people person, the hotel was very good for her especially after Dad’s passing. She became famous for her pan-fried steaks and catered many Christmas parties for businesses.

We were always amazed at who we would find sitting at her kitchen table talking to her and getting advice; we’re thinking the City of Lethbridge may have even benefitted from one of these sessions. Mom became quite the community person and believed in giving the people what they want. Mom started having community summer sports days at the hotel with pig wrestling, chariot races and a horseshoe tournament. Mom sold the hotel in 1996 and retired to Lethbridge, but retirement for her meant continuing to manage her many rental properties in Shaughnessy and Picture Butte. She had loved her cattle on the farm and every calving season she would remind us of what to do and look for.

She was predeceased by her husband Andy in 1973, an infant son Jerry and son Wesley in 2011.

Special thanks are given to the staff of Black Rock Terrace, St. Therese Villa and first responders, especially Jack Peacock, who were always great to Mom.

Interment at Mountain View Cemetery will follow the Reception at the church.

One Condolence for “STANKO, Rose”