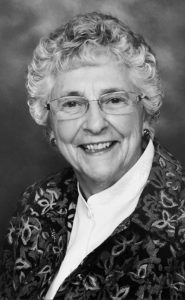 Kathryn Elizabeth Hurlburt was born at the Galt Hospital in Lethbridge, Alberta, to Hannah and Orval Hurlburt. She grew up in Milk River and after completing high school, she went to work for Taylor Pearson & Carson in Lethbridge until she had earned enough money to enroll at the University of Alberta where she received a Bachelor of Divinity degree and later a Master of Arts degree as she pursued her goal of becoming a minister in the United Church of Canada. It was while she served in this capacity at South Minster United Church in Lethbridge, that she decided to explore her interest in spiritual guidance but now in a hospital setting. She spent a number of years at Lamont General Hospital and later the Lethbridge Municipal Hospital as chaplain. Always striving to become better educated, Kathryn made the decision to become a faith based clinical psychologist and obtained her Doctorate in Psychology at the University of Oregon. Until her retirement in 1993, Kathryn operated a very busy private practice in Calgary.

Kathryn was always eager to learn new things. She was a talented artist and many friends and family members are proud owners of her work. Kathryn was fiercely independent and accomplished and was part of a wide circle of likeminded friends. Theirs was a very close and caring group who embraced life with exuberance and great joy.

A private family Memorial Service will be held.