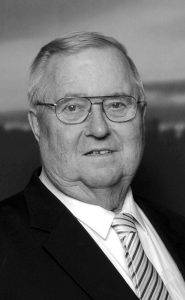 The world lost a brilliant mind; a man with a passionate responsibility to business, community, and most of all, his family. Dale passed away at the age of 79 years, on Saturday, November 17, 2018 at Chinook Regional Hospital in Lethbridge, AB. Dale was born in Lethbridge, AB, spent his early years in Shaunessy and Iron Springs, AB where his father was a school Principal. At age 10, Dale’s family moved to Coaldale, AB. Following high school, Dale attended Lethbridge Junior College, and the U of A in Edmonton, AB where he excelled both academically and physically setting a running record, receiving the Alberta Juvenile track and field award for the half-mile run. He loved sports. Dale was fiercely competitive, driven to excel, both as a participant and a coach. The ball fields in Milk River still echo with Dale’s resounding long drawn out “YOU’RE OUT.” Dale’s business acumen proved successful in several ventures beginning with a Ford dealership in Campbell River, BC. In 1975, Dale joined forces with his brother in-law, Roy Hummel in Milk River, AB, to purchase the International Harvester dealership from Roy’s uncle, Paul Madge, creating a third-generation ownership, renamed Roydale International Ltd. For 34 years, this proved to be an exemplary marriage between a hotshot salesman and a meticulous financial whiz. A fourth-generation dealership involving the sons of each partner was established in Red Deer, AB, Roydale New Holland. Dale is survived by his loving wife of 49 years, Betty (Hummel) Baldwin; son Bryce Baldwin of Red Deer, AB; daughter Maureen (Ryan) Roberts, and grandchildren Dylan and Keira Roberts of Calgary; a sister, Margaret Jean Baldwin of Lethbridge, AB and her daughter Rebecca Baldwin of Fort McMurray, AB. Dale’s daughter, Christie Weigel and her children, Levi, Lauren, and Alexis of Surrey, BC were reunited with him in 2007. True to form, Dale has responsibly shared in their lives. Dale was predeceased by parents, Donald and Bessie (Nolan) Baldwin of Coaldale, AB and a twin brother, Donald Ramsey Baldwin. Mourning his loss are Betty’s siblings: Wally (Gloria – deceased), Dianne Hummel-Nelson (Bill-deceased), Joanne Rolfe (Gordon-deceased), Roy (Gail) Hummel, Ruth (Rick) Melvin, Amy (Chuck) Bradley, Doris (Jim) Slag, and Dale Hummel. A United Church ervice will be held at 2:00 PM, Thursday, November 22, 2018 at ST. PETERS CATHOLIC CHURCH, 301 Main Street, Milk River, AB. A luncheon will follow in the MILK RIVER CIVIC CENTRE, 321 3rd Ave NE. Dale will be laid to rest in the Milk River Cemetery at a Private Family Burial. In lieu of flowers, donations can be made to MILK RIVER COMMUNITY SCHOOL ENHANCEMENT COMMITTEE, Box 465 Milk River, AB. T0K 1M0.