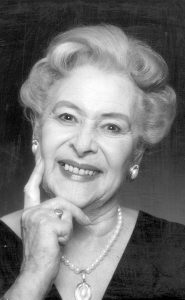 Mary Phyllis Cranley of Calgary, Alberta, beloved wife of the late William Joseph Cranley, passed away peacefully on November 14, 2018 at the age of 96 years. Mary was born in Ascot, England on April 25, 1922. In the late 1930’s, Mary commenced training as a British Army nurse. She was first stationed in London during the outbreak of World War II. Within three years, she was stationed at a naval hospital in Taranto, Italy. It was during this time she met her future husband, William Cranley M.D., a Surgeon Commander in the British Navy. They were married in Italy in 1944. The family settled in England following the war and emigrated to Canada in 1954 taking up residence in Prince Albert, Saskatchewan. They would eventually move to Lethbridge in 1962. Mary moved to Calgary in 1995 to be closer to family members. Mary was an avid gardener and an extremely accomplished seamstress. She often commented that the happiest days of her life were spent in Lethbridge. As well, Mary often commented on her love for the nursing profession and how proud she was to have served in that capacity. Mary is survived by her two daughters Gillian Steward of Calgary, Alberta and Madeleine Cranley (Bill Polsky) of Pointe Claire, Quebec; son Michael Cranley of Calgary, granddaughter J’Val Shuster of Calgary, great granddaughter Esmeralda Shuster of Calgary, and sister Hilda Foss of Coventry,England. Mary was predeceased by her sisters Margery, Joan, and Dorothy. Family and friends are invited to pay their respects between 12:00 PM and 12:45 PM on Saturday, November 24, 2018 at MARTIN BROTHERS RIVERVIEW CHAPEL, 610 – 4th STREET SOUTH, Lethbridge, AB. Interment to follow at 1:00 PM, on Saturday, November 24, 2018 at Mountain View Cemetery in Lethbridge. Flowers are gratefully declined. For those who wish, memorial donations may be made to FOSTER PARENTS PLAN OF CANADA or U.S.C. CANADA.