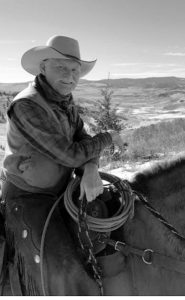 Rob was born in Calgary, Alberta. While living with his family on an acreage in the Bearspaw district he learned to ride horseback. Later, living near Priddis, he was entranced with his summer job of helping a local rancher. In grade nine, at Red Deer Lake School he received the Governor General Award for Outstanding Academic Achievement; in grade twelve at Lord Beaverbrook High School in Calgary, he earned three awards – academic, athletic and social. After two years of studying for a B.Sc. in Agriculture at U of A his high marks allowed him to skip two pre-vet years and go right into Veterinary Medicine at U of S. He graduated with distinction with a DVM Degree in 1978. For several years he practiced in a large animal clinic in Strathmore. Then, with help from his father, he bought The Three Walking Stick Ranch, a cow/calf operation in the Porcupine Hills west of Claresholm. He loved the ranch and loved working with cattle, particularly when riding a favourite saddle horse. His skill in breeding produced superior beef much sought after by buyers. Rob participated in brandings, round-ups, weaning and other ranching activities (which might have occasionally included a wee dram of whisky or a cribbage board!). He worked, and played, alongside neighbours and local ranchers developing wonderful, lifelong friendships. His skill as a vet was valued and often called upon by his community. During the financially lean years of Alberta’s BSE outbreak, Rob worked full time as a vet in the Claresholm Veterinary Clinic and as a full-time rancher – his working days were long, indeed. His greatest joy was sharing the ranching way of life with his kids. Rob taught gymnastics to Claresholm children and helped them work through 4H. The Hills and his community inspired him to write cowboy poetry which he read at many public events. He was instrumental with the East Trout Grazing Association and was active in Ducks Unlimited for 35 years. His hobby of playing the bagpipes grew into performing at Robbie Burns suppers and other local events. He held the position of Pipe Sergeant in the Lethbridge Legion Pipe Band and his band mates were a close circle of friends. He was very proud of his two sons who developed piping talents that exceeded his own. Rob is survived by his son Leigh (Bronwyn) and their children – Isolde, Cassian, Finnian; his brother Douglas (Sandra) and their three children; his sister Mary Jane (Ty Pfeifer) and their three children; his sister Jessie (Spencer MacCosham) and their four children; and his parents Merritt and Benni Chisholm. He also is survived by his estranged wife Robin and children Shannon, Gavin, Alec (Laura) and grandsons John and Gordon. During the years of Rob’s journey with cancer, his three siblings and oldest son formed a dedicated support group. His wonderful neighbours and friends gave him hours of skillful help and much sincere kindness – they truly were an inspiration. A Celebration of Rob’s Life will be held at 2:00 PM on Monday, November 26, 2018 at the Claresholm Community Centre (5920- 8 Street West, Claresholm, Alberta) followed by a reminiscing lunch. All who knew and liked Rob are welcome to attend. In lieu of flowers, donations to the Claresholm and District Health Foundation P.O. Box 2638, Claresholm, Alberta T0L 0T0 (www.cdhealth.ca) in Rob’s name will be gratefully accepted.