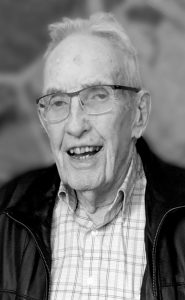 THOMAS EUGENE “TOM” RICHARDS, of Coaldale, reached the end of a long and productive life on Saturday, November 17, 2018. The 91-year-old passed away following a brief illness at the Chinook Regional Hospital, very near the spot where his longtime wife and inseparable partner, Margaret Richards, had predeceased him three months earlier.

In addition to Margaret, with whom he will share a columbarium niche at Mountain View Cemetery, Tom was predeceased by his father Ed in 1985, his mother Helen in 1996 and his brother Bill in 2014.

Tom was born in Lethbridge’s Galt Hospital (now the Galt Museum & Archives) on September 3, 1927. He was the oldest of three children belonging to Ed & Helen Richards, who farmed northeast of Coaldale.

Tom’s childhood memories included riding in a horse-drawn wagon to school, waking on frigid winter mornings to the sound of his father starting a fire in the kitchen, and seeing men desperate for work pass by atop rail cars during the Great Depression. A member of the local Air Cadets, he was preparing to follow his father’s example and enlist for military service when the Second World War ended a few weeks before his 18th birthday.

Tom and his younger brother Bill remained on the family farm near Tempest, and with the help of their parents expanded the operation to include land southeast of Chin.

On November 14, 1955, Tom married Margaret, a Vancouver girl he met while she was visiting a friend in Lethbridge. They later had two children, Jean and Harley, and spent the next 34 years on the farm.

Tom and Margaret moved to Coaldale in 1989, and resided there for almost all of their remaining years. At the time of his death, Tom was living in the Sunny South Lodge – not far from the curling rink where he had spent much of his winter leisure time over the years.

Tom’s family will celebrate his life at a private gathering. They respectfully decline flowers and other tributes, as well as donations or gifts in lieu thereof. Instead, they wish to thank Tom and Margaret’s many friends and acquaintances for enriching the couple’s lives over the years.