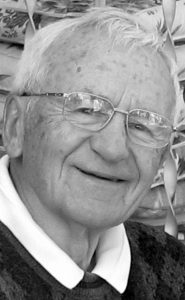 Dr Walter Mitson, beloved father, grandfather and uncle, passed away peacefully in his room at Tudor Manor on November 22, 2018 at the age of 96. He is survived by his three children; Layne (Marilyn), Denise (Grant), and Joyce (Brian); his grandchildren Ben, Mackenzie, Kyra, Nolan, Alyssa, and Austin; his sister in law Anne Overn and his nephew Rob Overn (Janice). He is predeceased by his wife Marie, his sister Joyce, and his parents Michael and Budinka (Betty). Walter was born in Satumara Romania of Serbian descent in 1922. He moved to Canada to reunite with his parents at the young age of 13, making a large part of the journey on his own while caring for his younger sister. He spent a number of years with the Canadian Army, and after that went to school at the University of Toronto and graduated as a Doctor of Optometry. He also held a Bachelor of Science degree from the University of Alberta. Walter put himself through school in large part by playing accordion. He began preforming at the Palliser Hotel at age 16, and often played with the popular dance band Sonny Fry and the Gentleman of Music when they performed there. His great love of music continued his entire life, and he was still singing at 96. He started his career as an optometrist in 1952, had a thriving practice for 53 years, and retired reluctantly. He dedicated one day a week to attend the smaller communities around Lethbridge that didn’t have an optometrist. He married the love of his life Marie in 1955, and the two of them greatly enjoyed family and friends and travel. Along the way he became the president of the Alberta Optometric Association and was granted a lifetime membership in 1993. He was also a recipient of the Order of Alberta, served on the University of Lethbridge Senate, the University of Calgary Senate and was the Finance Chairman on the Lethbridge Regional Hospital Board. Walter and Marie also traveled to the British Virgin Islands on behalf of the Federal Development Agency (CIDA), where he supervised a team that did the eye examinations of every school child. He truly loved his community, and was active in the Lions club, Elks club and the Masons. Walter had a tremendous zest for life. He and Marie loved to entertain, and their parties often featured many musicians. He was an avid salmon and fly fisherman, and usually managed to catch his limit. He also took up golf later in life, and thought he never had a bad game because he enjoyed it so much. He will be greatly missed by his family and friends. A Funeral Service will be held at 1:00 PM on Wednesday, November 28, 2018 at MARTIN BROTHERS RIVERVIEW CHAPEL – 610 4 STREET SOUTH, Lethbridge, AB. There will be a private graveside service at Mountain View Cemetery for family members.

Donations in memory of Walter can be made to www.jbmusictherapy.com/gift-of-music-therapy/