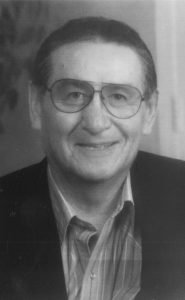 It is with profound sadness that we the family of Woodrow announce his passing on December 1, 2018 at the Cardston Hospital after a courageous battle with Cancer and a long hard struggle with Parkinson’s Disease. He is now in the presence of the Creator and all the family members that have gone before him.

Left to mourn Woodrow’s passing is his life-long partner, best friend, and loving wife of 61 wondrous years, Delphine, who spent selfless days at his bedside and dedicated her time to tend to his every need. Mom truly respected her marriage vows… “In Sickness and In Health”

Dad was born on July 7, 1939, the oldest to his five siblings, at the St. Michaels Hospital in Lethbridge to Frank and Beatrice. He was raised on the Blood Reserve from the North End to the Bull Horn district and was a member of the Lone Fighters Clan. Dad was taken from his parents at the young age of six to attend the St. Paul’s Indian Residential School. He learned to survive both in the classroom and on the playground. It was in his senior years at school where he found his niche both in hockey and in the rodeo arena.

After leaving school in 1955, Dad entered the Army Cadets in Vernon, BC and was a member of the D&M Wing One Platoon for two years. As a result of his training he was a disciplined person. He soon returned home to the Blood Reserve.

On a cold winter’s night in 1957, two warm hearts met and thus began the courtship, marriage and 61 years of commitment between Dad and Mom.

One of dad’s favorite summer trips was packing up the family and heading down to the Crow Agency Indian Days and Rodeo Celebrations. It was here, in the Indian way he became an adoptive brother to Sonny Huggs and Franklin Plenty Hoops.

Dad soon felt a loss of identity and this lead him down the road of an alcoholic. In his own words “I started drinking at the age of 17, I guess mostly from frustration…I was caught up in two worlds. I really didn’t fit into the White man’s world and I was losing my Indian ways”. Ironically, he entered the St. Paul’s Treatment Centre in 1979, the very same structure which housed the Indian Residential School that he vowed he would never re-enter. Following his treatment, he went back to carpentry for a brief period but realized he was back in the environment that encouraged alcohol. Dad’s calling was soon answered when he was hired as a drug and alcohol counsellor at the St. Paul’s Treatment Centre and earned his way up the proverbial ladder to a senior counsellor and eventually the Executive Director. Dad soon reintroduced a respect for himself, his environment, and his Creator. Dad immersed himself with his work and his new found interest in the pow-wow circle becoming a Men’s Traditional dancer and enjoying himself every summer at various Indian Day Celebrations with his good friend and close relation, Regis Black Plume. Dad’s new found spiritually included joining the Magpie Society, completing his Cursillo, and assisting his uncle George in sweat ceremonies. In November of this year Dad reached a milestone of 39 years of sobriety.

In preparation for their yearly NFR Las Vegas trip in December, Dad would plan every January on booking rooms and flights for him and Mom. They made many friendships on these trips as many of the people were regular attendees as well. Dad would return home after each trip to re-live the latest rodeo highlights to his family and friends, their first trip to the NFR was in 1985 and their last trip in 2015 ended their 30 year stint due to Dads failing health.

One thing that was very special to dad was when he was watching his son’s then his grandson’s play hockey. This took him to various rinks in Canada and in the States as well as attending the Native Provincials Tournament every year. One of his favorite places to be was in a rink.

In Dad’s retirement in 2009, he spent his leisurely time at home watching TV and enjoying his favorite sports; rodeo/bull riding, hockey, golf, football, baseball, and mom also got him to watch the tennis matches.

Dads last remaining months in the hospital were spent with Mom, the kids, and grandkids taking turns coming in to feed and visit with him. Many enjoyable stories were recalled and shared.

Dad was a true family man, enjoying his children and grandchildren’s accomplishments and sporting events. Both mom and dad were invited to the many family birthdays, holiday meals and celebrations. Dad will leave a big void in his Children and Grandchildren’s hearts but will be fondly remembered by each and every one of us with our own special moments spent with him.

We would like to give our heartfelt thanks to Dad’s home care nurses, Che Scott and Jonathan Payne and to the kindness and care dad received from the Cardston Hospital staff: doctors, nurses, housekeeping, dietary, and security. We, the family recognize and send Dr. Clarke a special thank-you for not only the physical care but for the true sincerity and emotional support he gave to Dad over the years under his care. We are also thankful to Dr. Shukoor and the nursing staff at the Palliative Care Out-pt. department at Chinook Regional Hospital.

The Funeral Service will be celebrated at the ST. PAUL’S ANGLICAN CHURCH on the Blood Reserve on Friday, December 7, 2018 at 11:00 A.M. Interment will follow at the St. Paul’s Cemetery. Following the interment a feast will be provided at the Naatsikapoipiita Gymnasium behind the Kainai Healing Lodge.