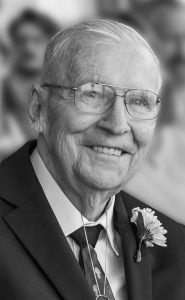 EIVIND TROCKSTAD, beloved husband of the late Jessie Trockstad (nee Martin), passed away peacefully at home on Thursday, December 6, 2018 at the age of 83 years.

Besides his loving wife of 58 years, Jessie, Eivind was predeceased by his parents Alf and Janet Trockstad.

Eivind was born in Lethbridge, Alberta at the old Galt Hospital on May 22, 1935. Eivind met Jessie in their early school years and stayed together until finishing school and moving to Edmonton where Eivind joined the Canadian Air Force. Together they moved to the Northwest Territories, where Eivind worked for the Ministry of Transport as a heavy equipment operator. There, Jessie and Eivind started their family and welcomed their first child in 1957. In 1975, their family moved back to Lethbridge, where Eivind worked the remainder of his 35 year career for the ministry of transport.

Eivind’s love for curling started after his move to the Northwest Territiories and continued throughout his life. You could always find Eivind watching curling as he always enjoyed a good curling match.

The highlights of the last couple of years for Eivind was being reunited with his great-grandson and walking his grand-daughter, Melissa down the aisle this past summer.

Eivind will be sadly missed by his family, friends and his “Pop’s Pub Crew” who fondly knew him as “Grandpa”.

As per Eivind’s wishes, no formal Funeral Service will take place. In lieu of flowers and in memory of Eivind, donations may be made to the Heart and Stroke Foundation – 119 14 Street NW, Calgary, Alberta, T2N 1Z6 or to Alberta Child Find – 110, 105 12 Avenue SE, Calgary, Alberta, T2G 1A1.