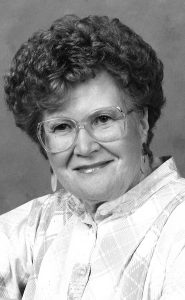 Ms. Angela Slezina of Lethbridge passed away peacefully at the West Highlands Lodge in Lethbridge on Monday, December 10, 2018 at the age of 90 years. Angela was born in Kuchyna, Czech Republic on May 9, 1928 and immigrated to Canada with her mother and brother in 1933. She lived in Ontario, Creston, BC, and then settled in Kipp, AB. Angela married Frank Slezina in 1947 and together built a family business called Southholm Angus Ranch. Later in life, Angela moved to Lethbridge where she worked for Imperial Fashions as a fashion consultant and model until she retired. With her green thumb and culinary skills, Angela rarely served store bought food. Although she was always busy working, she found time to listen to music, dance and cuddle with her favourite pet. Angela always put her family first until the day she died. Angela is predeceased by her son Kenneth Slezina, and granddaughter Amy Slezina. She is survived by five children; Millie (John) Boake, Fran (Garry) Sartison, Gary (Dena) Slezina, Evelyn (Colin) Yackulic, Lonnie Slezina, brother Edward (Linda) Klima, sister- in- law Pat Klima, as well as numerous grandchildren, great- grandchildren, nieces and nephews. Angela was predeceased by her parents Joseph and Mary Klima, and brother Bill Klima. Angela’s sweet smile and kind heart will be missed and remembered. A Celebration of Angela’s Life will be held at 11:00am on Thursday, December 13, 2018 at MARTIN BROTHERS RIVERVIEW CHAPEL, 610 – 4 Street South, Lethbridge, Alberta.

One Condolence for “SLEZINA, Angela”