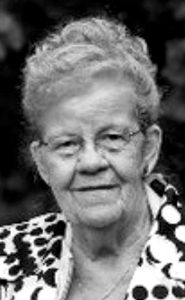 Gloria May Smith of Lethbridge AB., wife of Robert passed away after a lengthy illness on December 13, 2018 at the age of 81 years. Gloria was born in Bracken, Saskatchewan on May 23, 1937 to Leo and Hanna Brandon. She grew up on the Brandon cattle ranch south of Valmarie, Saskatchewan near the Montana border. She attended school at Stoney Trail Country school two miles from the ranch headquarters. She learned about ranch life at an early age, rounding up, branding, and vaccinating cattle. She was a real animal lover and always had dogs and cats for special pets. Gloria married Bob Smith on January 21, 1958 in Havre, Montana, and they started their life together in Valmarie, as an Imperial Esso bulk agent. Through the years they moved to Shaunavon SK, Taber AB, and finally to Lethbridge where they worked with Husky Oil, and in their own family trucking business Del-Rio Management LTD. where Gloria was a dispatcher and took care of the books. While at Husky Oil Gloria fueled up and washed windshields on eighteen wheelers. Gloria was great at doing needlepoint and cross stitch work and has many framed pictures of her pieces that she had won first place ribbons for at the exhibition. Along with her love of cross stitch and needlepoint, Gloria had a passion for country music, and she was always singing along, slapping her knee and telling us stories of the stars lives, Blake Shelton in particular. Besides her husband Bob she is survived by her son Arlene (Jacki) Smith, and grandchildren, Brandon (Jenna) Smith, Dustin (Jill) Smith, Virginia (Reg) Reeder, Jessie (Josh) Vaters, and seven great-grandchildren. She was predeceased by her parents Leo and Hanna Brandon, brother Harland, and sisters Cleofae, and Fern. We all miss ya girl and will leave you with a thumbs up and a “beautymon” as you always did to us. Rest in Peace, until we meet again. As per Gloria’s request no formal service will be held. A Celebration of Life will be held by the family at a later date.