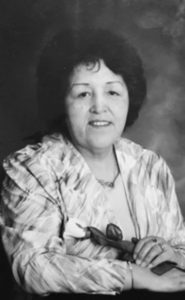 It is with deep sadness that we announce the passing of our dear mother, grandmother, great grandmother, sister, aunt, great aunt and loving wife ROSABELLE SHEILA FIRST RIDER – Ksiista’kioohkomii at the age of 83 years.

Rosabelle was born to the late Jane (Isstoi’kamosaa’kii) & George (Matoam’moh’kitopi) First Rider, her grandparents Iimitoako’s & Ii’tsiitsowaakii and was part of the Iisiisokaasimmi (Short Robe Clan). Rosabelle is survived by her loving husband Kenneth Wayne Tyson, they shared 60 years together living in Seattle, WA along with their six children: Sheldon, Kellie, Kenneth, Nathan, Robert, and Jennifer, grandchildren and great grandchildren. She is also survived by her adopted daughter Robyn, adopted son Farrell, adopted sister Pearl, and the Dators.

Rosabelle was raised traditionally by her parents and grandparents and then moving on to receive her education at St. Paul’s Residential School on the Blood Reserve. After this time, she continued to live with her parents on the farm and enjoyed riding horses, gardening, cooking and sewing. She would travel from the Blood Reserve to Washington, where she enjoyed fruit picking and spending time with her family.

Rosabelle moved to Yakima, WA in the late 50s and began working various jobs then moving on to Seattle, WA to work in the medical field and retired after 23 years from the University of Washington Hospital. She enjoyed shopping for all of her family and she made sure that everyone who crossed her path received a gift. She loved to fill boxes with presents and ship them back to her loved ones on the Blood Reserve. She had a spicy personality and was very protective of her family. She would travel back home for Sundance (Aakoka’tsin) every summer to support family.

Rosabelle is survived by her siblings Mary, Nora, Ervin and sister in-law Joyce. Nieces Amethyst (Leroy) Little Bear and Margaret Wabby First Rider of Seattle, WA. She is also survived by many nieces and nephews, extended family and relatives from the Blood Reserve, Siksika Nation, Blackfeet Nation; too numerous to include.

Rosabelle will be forever remembered and sadly missed. A wake service will be held Thursday, December 20, 2018 from 4:00 pm-7:00 pm, Funeral service will be Friday, December 21, 2018 at 11:00am at Columbia Funeral Home and Cemetery. Seattle, Washington. The First Rider family in Canada will be having a Memorial Service on the Blood Reserve in January 2019 – date yet to be determined.