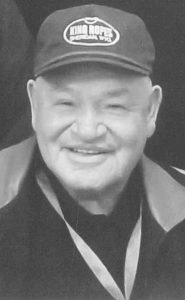 It is with great sadness and extreme sorrow we announce the sudden passing of a loving and devoted father, grandfather, brother, uncle and husband Lyman Tail Feathers. Lyman passed away December 30, 2018 at the Cardston Hospital at 70 years of age.

Lyman was born to Harvey and Nellie (nee Yellow Creek) Tail Feathers at the Blood Indian Hospital and was raised at their homestead in the Bullhorn area. Lyman attended St. Paul’s Residential School, graduating from Cardston High School and continuing his studies at the Lethbridge Community College and University of Lethbridge.

Lyman met the love of his life and together spent fifty precious years dedicating themselves to family. They built their homestead in Bullhorn where Lyman would often be seen tending to his horses, faithful family dogs or planting trees and flowers for Barb and his children. When Lyman became a dad he ensured his family had a wonderful home. Lyman took great pride and love teaching his children, grandchildren and extended family the craft of ranching and caring for the homestead where they welcomed many friends and family for barbeques and family gatherings. He was a proud and loving father to his cherished Jolaine, Lynel and Jade. Lyman supported his children in all their endeavors with school, sports and recreation most recently for Jade and her goal of returning to continue her post-secondary education. His life joy was in becoming “grampa” where he expanded his nurturing ways on his grandchildren as they grew alongside their hero. His warm smile and humility made all feel special. Lyman made his Cursillo in the early 1980’s. He acknowledged the many challenges he encountered but always said he had his own spiritual connection to our Lord and Creator.

Lyman was an athlete. His professional sporting career began with the Blood Reserve Boxing Club. His tenacity in the ring led him to Golden Gloves title at the tender age of 12. He was known to be “ferocious” in the ring winning 87 of 90 matches but outside of the ring he remained a true gentleman. Lyman continued his ascent in sports making a break in hockey and at the young age of 16 established a spot amongst the greats of Blood Reserve/Ranchland hockey. He and his lifetime friend, Roy Fox, were the youngest players on the team and held their own alongside the men. Lyman retired from hockey as a Kainai Chief but could not stay out of the rink. He coached hockey passing his skills onto his son Lynel and many Blood Reserve youth. Up until his passing, you could still see Lyman in different arenas encouraging Kash, Payton, Marshal, Rhegan & “Cota”.

Rodeo, too, was not ever far from Lyman’s reach. As a youngster he competed in the event he was fond of…steer wrestling. He won many titles and continued true sportsmanship in this arena as well lending out his beloved horses to many travelling cowboys. Lyman’s love of the sport filtered to his treasure, Jolaine, as she started her barrel racing career at the age of five. He was proud of her accomplishments. His support continued as his grandchildren Kash & Kiley and great-granddaughters Rhegan and “Cota” followed the pursuits of their legend they call “Grampa”. Lyman was committed to the sport. He was a member of IRCA in its early years and hosted many Blood Reserve Rodeos and steer wrestling schools at his home.

Lyman was employed by Blood Tribe Administration for many years. He was also a member of the Blood Reserve School Bus Coop for 26 years serving both as a bus driver and later as a senior supervisor. Lyman was respected and loved by the families he served, especially his number one priority, the students. On his bus run, he would often stop at the nearby food mart treating the students. After his retirement from bus driving, his students were known to ask when he was going to start driving again; they missed him so much. Lyman could not just retire from an occupation he loved. At the time of his passing, Lyman continued his duties as Blood Reserve Bus Coop Senior Supervisor.

Lyman was a good conversationalist captivating company with fantastic and his usually funny storytelling. His work, coaching, rodeo, travels and his love for storytelling made him many, many lifetime friends. The kind, gentle and caring soul will be missed immensely. Bullhorn will not be the same without Lyman.

A Family Service will be at Legacy Funeral Home, Cardston on Sunday, January 6th from 5:00 to 8:00 p.m. The Funeral Service will be at St. Paul’s Anglican Church, Blood Reserve on Monday, January 7th at 11:00 a.m.. Interment in St. Paul’s Cemetery, Blood Reserve. Feast: Following the Graveside Service, relatives and friends are invited to further share this day with Lyman’s family at the South Hill Chapel in Cardston, AB.