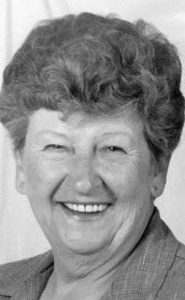 It is with great sadness we announce the passing of Alice Gillis at the age of 82 on February 11th 2019 at Edith Cavell Centre with family by her side. Alice leaves behind five children, Leslie (Phil Jennings), Moe (Yumiko), Kenn (Deanna), Scott and David. Grandchildren Courtney, Meaghan, Daniel, Ainsley, Saasha, and Riley. Also, niece Pat Hendry (Art Skow) and their daughter Kirsten. Her beloved husband, Moe, passed in March 2018.

Alice was born March 19, 1936 in Vegreville AB to Kenneth Allan and Mary Louise Campbell. She also had one sister, Evelyn Hendry, both her parents and sister predeceased her. Alice attended school in Vegreville and Calgary, did a comptometer course and worked in the accounting field until she started a family.

She spent her youth being active in various sports and helping her dad with his catering business. She also helped build the house she was to live in until she got married.

Alice married Moe in 1957 and soon Alice was raising five children with many weekdays spent by herself with the young family as Moe was working out of town. She returned to the work force once the children were all in school but made sure she was home for them before they returned for the day.

Alice successfully moved the family with Moe’s job transfers to Vancouver, London Ontario, Calgary and finally to Lethbridge in 1977. Many summers were spent out at Mara Lake and the extended cousins on the Campbell and Gillis families were always welcome whether be 2 or 20 at a time!

Alice and Moe always placed their kids needs in front of theirs and it wasn’t until later that they began traveling by themselves. From traveling with the Old Timers hockey to the States and Europe, to the west and east coasts of Canada, they saw plenty. They travelled numerous times to Australia to see their daughter and her family. They loved traveling to Australia and as much as Moe was determined to live there, Alice would not leave her family and friends in Canada.

The love of golf saw her competing, and rating courses throughout Alberta. Alice organised many fun-filled tournaments at Henderson Lake, of which she was a member for many years until her health lapsed. She enjoyed a good joke or prank, even if on the seedy side. You could never out prank her, she always got the last laugh.

Family was the most important thing in her life, and many friends of her children were treated like family. Christmas Eve celebrations attested to this. Nobody was left on their own.

At Alice’s request, there will be a celebration of her life at a later date when family from around the world can come together.

Missed dearly but surely scheming and plotting something fun elsewhere!

One Condolence for “GILLIS, Alice”