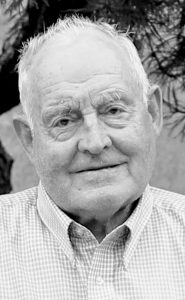 Reed Carlos Jensen was born on September 17, 1923 in Aetna, Alberta and is the second of seven children born to Einar and Lenore Jensen. He is the twin brother to Reece. They lived in Aetna until Reed was about 5 ½ years old, and then they moved to Barnwell, Alberta. Here Reed and his siblings grew up on the family farm 1 mile east of Barnwell. On the farm he learned to work and care for animals. Reed loved the farm, loved animals, and loved to work. There were lots of chores and other work to do and having a household of boys helped to get that work done. In November 1941, Reed and Reece enlisted in the Royal Canadian Air Force, went to Ontario to begin their training, and then were stationed in England until the end of WW II in 1945. During this time, Reed and Reece were never separated, and Reed was always grateful that they were able to serve together the entire time. At the end of the war, they came home and started looking for work, careers, and wives. On Oct. 28, 1953 Reed married Arma Jean Francis in the Cardston Alberta Temple. They lived in Barnwell at first, and then moved to Taber, where they lived from 1958 to 1970, where they farmed/ranched just west of Taber. In 1970 they bought a farm north of Barnwell, moved there, and continued farming/ranching until 1997. Reed and Jean were happy to have been able to raise their 9 children on the farm, to be able to teach them how to work, and to serve others. After retiring from the farm, they built a home in Barnwell and enjoyed hosting family gatherings. Reed was an active and faithful member of the Church of Jesus Christ of Latter-day Saints. He served in various roles and capacities in the church throughout his life and enjoyed whatever opportunity he had to serve. He was a counselor in a Bishopric, the Ward Welfare Farm Coordinator, and later in life, a Scout Leader. He also enjoyed working with Jean in the temple. Reed was predeceased by his parents, Einar & Lenore Jensen. His siblings, Vance, Reece, Thea, Devon, Dwin and Arden. He was also predeceased by his wife Jean, 2 grandsons, Jesse Jensen and Tyler Williams, and 1 granddaughter, Hannah Jensen. He is survived by his children, Kathy (Jordan) Samhuri, Carlos (Julie) Jensen, Nola (David) Williams, LoAnne Bajowa, Susan (Robert) Berezay, Alan (Jeannette) Jensen, Corinne (Tony) Yee, Eric (Chrystal) Jensen, and Carolyn (David) Crockett. He has 37 grandchildren, and 29 great grandchildren, with more on the way. Family was everything to Reed, and he always enjoyed having his children and grandchildren around. Nothing made him happier. The funeral service will be held Saturday, March 9, 2019 at 11:00 am at the Barnwell Chapel, with Bishop Troy Anderson officiating. Friends may meet the family Friday Mar 8, 2019 from 7:00-8:30 pm, at the Barnwell Chapel, or Saturday Mar 9, 2019, prior to the service, from 10:00-10:45 am. Internment will follow the service in the Barnwell Cemetery.

One Condolence for “JENSEN, Reed”