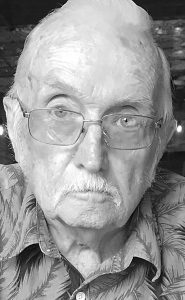 He is survived by sons Allan (Liz) of Lethbridge, Grant (Theresa) of Wainwright, grandchildren Dylan, Jennifer and Stephen, several great-grandchildren and his best friends Mel and Hilda Ray of Strathmore. He was predeceased by second wife Josephine in 2018.

Bill was born Jan. 26, 1932 in Bassano, Alberta to Harry, the CPR station manager, and Molly, a nurse. He was the only son and youngest of five children, three of whom Molly raised as her own after the death of Harry’s first wife Amy Newell in 1921.

Bill started work with Transalta Utilities, then known as Calgary Power, in the early 1950s, working in various commmunities including Pincher Creek, Warner, Westlock, Cardston, Raymond (where he was district manager), Lethbridge and Calgary before retiring at the Westaskiwin meter shop in the late 1980s.

Bill was an avid woodworker who crafted his own versions of the Norwegian violin and a talented musician who especially enjoyed playing banjo. Shortly before his passing, Bill had started taking Spanish lessons and was planning to buy a new inflatable boat so he could continue pursuing his other passion of fishing.

After Joey died, Bill fulfilled a bucket list dream last August of fishing for walleye on Rainy Lake, Ontario where Allan started his newspaper career. Until the end, he gleefully told stories, even to hospital staff, of accidentally bear-spraying himself in their cabin.

At his request, there will be no service.

One Condolence for “BEEBER, W.H. (Bill)”