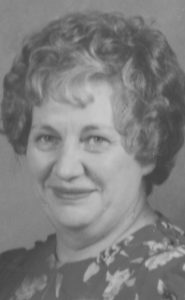 Janet was born in Magrath and had a wonderful, small town childhood. She met and dated Doug when she was 14, but when Janet moved to “enemy territory” (Raymond) for high school, their romance was seemingly thwarted. Janet made many friendships and had many fond memories of her Raymond days. Janet developed excellent sewing and ironing skills at her parents’ dry cleaning shop. After finishing high school, Janet worked in Edmonton. She then served as a missionary for The Church of Jesus Christ of Latter-day Saints in the Canada West Mission. Doug and Janet eventually got married and started their family in Glenwood. They moved to Cardston and lived there until they moved to Lethbridge in 1968. They lived in the same house on the “Greenstrip” for 50+ years.

Janet loved parties, both planning and attending them. She belonged to many clubs, including The College Faculty Wives, The Daughters of the Utah Pioneers, Forever Friends, and “the Club”. She worked as an Avon lady and at Sears. She was an avid sewer, quilter, knitter and a talented genealogist. Janet’s homemade chocolates were legendary. She had a beautiful alto voice and sang in several choirs. She was also an excellent swimmer.

As a faithful member of her church, Janet served in many callings. Her favorite role was when her husband was called to serve as President of the Nigeria Lagos Mission where she became “mission mom” to many young missionaries. She felt they listened to and followed her advice much better than her own children (smile). Doug and Janet cherished their time in Africa. Upon returning to Canada, Doug and Janet served as temple workers. After Doug’s passing, Janet missed him greatly and looked forward to reuniting with him.

Janet’s physical presence will be greatly missed by all who loved her; however, her spiritual presence will remain with each of us. Her life of devotion and dedication to Jesus Christ will forever be an example.

The Funeral Service will be held at 1:00 pm on Monday, April 1, 2019 at the Church of Jesus Christ of Latter-day Saints LETHBRIDGE ALBERTA STAKE CENTRE (scenic drive).

Friends are welcome to meet with the family on Sunday from 5:00 to 6:00 p.m. at SALMON AND SONS FUNERAL HOME (near the airport).

Interment will take place at 10:00 a.m. prior to the funeral at the Magrath Cemetery.