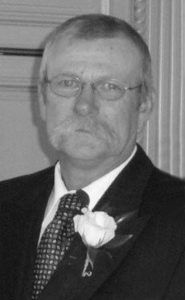 ROBERT DANNATT, of Warner, beloved husband of Joan Dannatt, passed away suddenly in Glenwood on Saturday, March 30, 2019 at the age of 63 years.

Robert is survived by his loving children, Kyle (Natalie) Dannatt and Lacey Dannatt, as well as his grandchildren, Xavier and Abbygale Dannatt, all of Strathmore. He is also survived by his three sisters, Judy Latosky (Sid), Marlys (Bob) Fyvie and Sharon (Dave) Crabb; his stepbrother, Don Johnston (Darlene); his stepsister, Judi Johnston; his stepmother, Doreene Dannatt and other extended family.

He was predeceased by his parents, Russ and Rose Dannatt, as well as some of his extended family.

Rob was raised in Warner until he moved to Olds to attend college in 1974, where he also met Joan. After school, Rob worked for a rancher in Claresholm. Joan and Rob were married on March 27, 1976 and moved just east of Coutts to work on a ranch.

Over the next 40 years, Rob worked many jobs – from the oil patch to farming – which took him and Joan all across Alberta. In 1997, they moved back to Warner where they resided until his passing.

In his younger days, Rob enjoyed curling, participated in 4H and played in a band, which took him to several dances in southern Alberta. He was also an avid bull rider and team roper. Rob loved to be around people and had the gift of gab. He loved camping at Whisper Valley with his family and friends. His kind nature, fun personality and bright sense of humour will be sorely missed but forever treasured.

In lieu of flowers and in memory of Rob, donations may be made to STARS, www.stars.ca/ways-to-donate/ab.

One Condolence for “DANNATT, Robert”