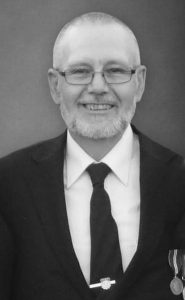 SAMUEL LESLIE WEST, beloved husband of Shelley West, of Picture Butte, passed away peacefully surrounded by his family, at the Foothills Medical Centre, on Saturday, April 6, 2019 at the age of 64 years.

He was predeceased by his daughter Chelsey, father Frank, father-in-law Arthur Bond and brother-in-law Kirby Bond.

Sam was born in Lethbridge, AB, and lived there until he was 12 years old. His family then moved to Calgary. After high school, Sam became a licensed auto and heavy duty mechanic, working for Aamco Transmission and Precision Transmission in Calgary. It was during this time that he met and married Shelley. Starting a family, they first moved to Lethbridge and then in 1985 to Picture Butte. Sam worked for Kunsman Transport in Lethbridge, Butte Motors and Farm Supply Ltd. in Picture Butte and then in 1991, started with the County of Lethbridge as the school bus mechanic. In 1995, the school board separated from the County and became Palliser Regional Schools, where Sam continued to work until his health forced him into early retirement.

In 1988, Sam joined the Picture Butte Volunteer Fire Department. This is where he found his passion. For the next 26 years, he poured his heart and soul into being a firefighter. He quickly moved up through the ranks, becoming the Volunteer Fire Chief in 1996. Sam was also instrumental in starting the first ambulance service in Picture Butte. He made many lasting friendships through the fire department and through hose laying competitions. The only thing he loved more was his family.

He was a proud and dedicated father, grandfather, son, brother and a very loving, understanding husband. He coached soccer, helped with first aid on his kids’ hockey teams, taught Sunday School and served on the Trinity United Church Board. The things he enjoyed most though were the camping trips, boating and family dinners where everyone gathered together. He was so loved and will be greatly missed.

In lieu of flowers, the family asks those who are able, to consider donating blood in Sam’s memory. For those who cannot, donations may be made to Canyon Church Camp, 210A – 12A Street North, #418, Lethbridge, AB, T1H 2J1, to rebuild the chapel destroyed in the Kenow Wildfire.