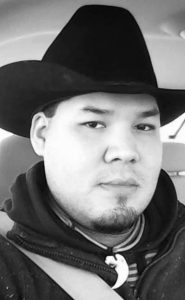 It is with the deepest sadness that we announce the passing of EUGENE MYLES WELLS (TWIGG), born April 6, 1986 – April 16, 2019, at the age of 33 years old. He is survived by his common-law spouse, Nancy Weasel Fat and their children: Hannah, Miley, Badger Rope Wells, and his oldest daughter Maryanna Smith. He also leaves to mourn his passing his Dear Mother, Annette Twigg, his Father Alvin Wells, and mother in law Carolyn Weasel Fat, along with his Grandparents, Richard and Geraldine Wells. Myles is also survived by his beloved sisters, Tawny Twigg, and Beth Wells (Cody Day Chief), and sister-in-law Sandy Weasel Fat. Myles treasured his nieces and nephews and will be deeply missed by all of them: Lexi Twigg, Ryder Myers, Rogan Bruised Head, Emmie Bruised Head, Richard Wells, and Leo Day Chief. Myles will also be greatly missed by numerous aunts, uncles, cousins, and friends.

Myles was raised on the Blood Reserve in the Old Agency Area by his mother Annette and with his sisters Tawny and Beth. He started playing hockey at the age of 5 years old, and began riding steers at the age of 12, he eventually moved into bull riding, his lifelong passion. As a young boy, Myles started learning how to make bull riding ropes, which as an adult he turned into a business after an injury sidelined him. He was very proud of his business, Myles Wolf Wells Ropes, which was rapidly growing as he was shipping ropes all over North America to various Professional Bull Riders. The family would like to thank the Doctors and Nursing Staff at the Lethbridge Regional Hospital, Intensive Care Unit, with special thanks to Dr. Low. Also, thank-you to all those who have sent in donations and have been supportive to those close to him at this difficult time.

An all-night Wake Service will be held at 7 pm on Thursday, April 25, 2019 at White Calf Community Hall, Stand Off.

Condolences may be sent at www.legacyfuneralhome.ca

One Condolence for “TWIGG-WELLS, Eugene”