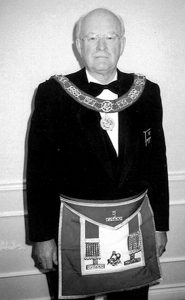 Bob passed away March 12, 2019 at the Lethbridge Regional Hospital. Born 1927 in St. James (Winnipeg) MB. Bob is survived by his loving wife Elaine; two daughters Kelly Mueller (Lenard) and Sheri White; grandsons Jarett Mueller and Aaron White; one nephew; three nieces and their families, Dauphin and Winnipeg and one cousin, Dave Sinclair – Victoria, B.C. Bob was predeceased by his only brother Frank in 2017. Graduating from St. James High School – Winnipeg, Bob began work with the Canadian Pacific Railway in 1944 – Retiring in 1987. During Retirement, Bob enjoyed many hours golfing at the Raymond Golf Course, enjoyed bowling, stamp collecting and travelling. Bob was a dedicated and well-respected Freemason for nearly sixty years. While able to be active, Bob faithfully contributed as a member, officer and presiding officer of the various Masonic bodies that Bob belonged to. On the York Rite side, these included North Star Lodge No. 4, Shekinah Chapter No. 4 Royal Arch Masons, Acre Preceptory No. 66 Knights Templar, Alberta Council No. 5 and Ararat Lodge No. 5 Cryptic Rite Masons. Bob was honoured by invitation to the Order of the Red Cross of Constantine – Wild Rose Conclave No. 37, York Rite Sovereign College of North America – Diversity College No. 202 and Knights of the York Cross of Honour – Western Canada Priory No. 35. On the Scottish Rite side of Masonry, Bob belonged to and served as an officer with Lethbridge Lodge Of Perfection and Rose Croix, as well as Consistory in Calgary. In addition to serving in Lethbridge, Bob held a number of appointed Grand Offices for the: Grand Lodge of Alberta, Grand Chapter Royal Arch Masons of Alberta and the Sovereign Great Priory of Canada. As a mark of the esteem Bob was held with by his fellow Brothers, Companions and Knights, he was granted Emeritus status by the York Rite bodies. We will be honouring “Bobs” life in a way he would appreciate with a Celebration of his life which will be held at 11:00am, on Saturday, May 4, 2019 at MASONIC HALL, 315A – 10 STREET SOUTH, Lethbridge, Alberta. This is open to all who may wish to attend.