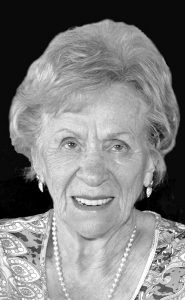 Gertrude “Trudy” Elizabeth MacDonald was born in Craven, Saskatchewan to Marie and Karl Wagner and grew up on the family farm with her 10 siblings, all now deceased. She married Donald Strowger MacDonald on March 10, 1943 and they enjoyed many happy years until Don’s death in 1978. During their marriage, they lived in Winnipeg, Halifax, Regina, Saskatoon, North Battleford, Calgary and Lethbridge, following Don’s career, at first with the Canadian Army, then with General Motors and later as a realtor. Trudy was a loving mother and homemaker. Her cooking was the best! She also held part-time retail positions at Simpson Sears and Woodward’s. In earlier years she volunteered with the United Church and served as president of St. Martin’s UCW during her years in Saskatoon. She was a long-time member of McKillop United Church in Lethbridge. She also supported the Gyro Club of Lethbridge as a member of the Gyrettes for many years. Following the loss of her husband, Trudy met Robert Gilmar and they enjoyed life together until her passing. Some of her fondest memories were of their many years of “snow birding” to Mesa, Arizona, where they owned a winter home. While in Mesa, Trudy and Bob enjoyed many activities, including golf, crafts, card playing, dinners and dances. Trudy loved to dance! They developed many dear friendships over the years at Carriage Manor Resort. Trudy is survived by her children, Karla Wenhardt (Darrell) of San Diego, Joanne Bobinec (Doug) of Wrentham, grandchildren Scott Stevenson, Chris Fero (Suzanne), Shauna Ferguson, Gina Watson (Jamey), Shanna Sutherland (Vince), Charlene Sterling (Rick) and nine great-grandchildren, as well as many nieces, nephews and their families. She is also survived by her long-time companion, Robert Gilmar of Lethbridge. Besides her husband, Donald MacDonald, Trudy was predeceased by her daughter Ora White and son-in-law Derry White. A Memorial Service will be held at 1:00pm on Saturday, May 4, 2019 at MARTIN BROTHERS RIVERVIEW CHAPEL, 610, 4 STREET SOUTH, Lethbridge, Alberta, Reverend Glenda Wert, officiating. The family thanks the Home Health caregivers and the staff at Edith Cavell Care Centre for their kind care of Trudy in her final years.