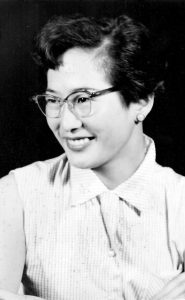 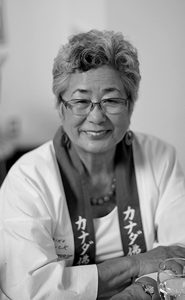 Reiko Takeyasu (nee Okahashi) passed away peacefully at the Chinook Regional Hospital on May 3rd, 2019 at the age of 86. She succumbed to double pneumonia and the effects of Alzheimer’s disease. Throughout her illnesses, she maintained a cheerful and pleasant outlook with family, friends, and care givers. She was born in Port Hammond, BC (now part of Maple Ridge) on Apr 23rd, 1923 to Masuzo and Kikuye Okahashi. Her mother passed away when she was only 2 years old, resulting in her being fostered to a Finnish family. She often joked that she was an ‘unfinished Finn’. During the Japanese Canadian Internment, she chose to rejoin her family and was relocated to the Coaldale, Alberta area. She met and married her first husband George (Joji) Takeyasu in Aug 1956. She had 3 sons. Before the children were of school age, she worked selling Fuller Brush products, and later worked as a bookkeeper for the original CJOC radio station for 25 years; she is remembered fondly by her co-workers. Upon retirement she was presented with a trip to Hawaii. After George’s passing in 2001, she married Elmer Dell Bolick in 2005. They enjoyed dancing at the LSCO and many trips and cruises. She, Elmer and friend Elsie Krasman, formed the ‘Recycled Teenagers’ who were a Karaoke group that performed at various venues. Elmer passed away in October of 2018. She was an extremely active volunteer. She rose to the rank of District Commissioner in the Scouts Canada organization, and District Governor in Toastmasters. She attended a multitude of cub/scout camps and jamborees, as well as Toastmaster competitions and conferences. Nadia Campbell, is a dear friend that goes back to the early days of Toastmasters with Reiko. She expressed her creative side with Sumi-e (Japanese Brush painting), Ikebana (Flower arranging) and charcoal sketching. She is pre-deceased by her siblings George and Charlie Okahashi, Merry Sameshima, her youngest son Stacey, and both her husbands George Takeyasu and Elmer Bolick. She is survived by her sisters Lily (Yas) Yamashita and June (Horsey) Tajiri, her sons Lloyd (Cynthia Palahniuk), Trent (Veronica Horn) and grandchildren Reanna, Cassidy and Sara-Jane. She was also blessed with many nieces, nephews, grand-nieces, grand-nephews, a great-grand nephew and 2 upcoming great-grand niece/nephews. She hosted several of them in her home over the years, notably Dr. Kathy Yamashita, Justin Yamashita and Chandra Yamashita. When her sons were younger and she left on trips, she would get niece Linda to stay with them, so that they would be fed and ‘not kill each other’… A viewing will take place at Generations Funeral Home (703 – 13th St. N. Lethbridge) on Friday May 10th, 2019 @ 7 PM. The funeral will be held at the Buddhist Temple of Southern Alberta (470 – 40th St. S. Lethbridge, just south of the Casino) @ 10 AM, a lunch will follow. Special thanks to the nurses and staff at the Chinook Regional Hospital, Unit 4C and the Good Samaritan Park Meadows Village for the special care and attention they gave to Reiko. In lieu of flowers or koden, donations may be made to the Lethbridge Alzheimer’s Society, #40, 1202 – 2 Avenue South, Lethbridge.

One Condolence for “TAKEYASU, Reiko”