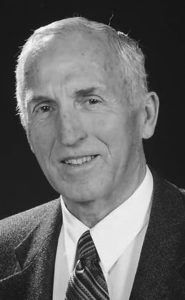 David was born in Cardston, Alberta and was the fifth of eight children born to Orzie and Eula Steed. He had a wonderful childhood with many cousins and relatives spent hiking, fishing and enjoying the outdoors, often in Waterton Park and surrounding areas. In high school, David was a key player in the Cardston’s provincial basketball championship and went on to play for the University of Alberta Golden Bears. He decided to focus on his studies after a year and completed his Dentistry training in 1959. He married Wilma Hogenson, of Stirling, in 1957, after they met at University. They were married in the Idaho Falls temple of the Church of Jesus Christ of Latter-day Saints. They then moved to Lethbridge and started his Dental practice, where he worked for over 35 years.

David contributed greatly to his community, at one time serving as mayor of Stirling. He continued to serve in his community and church over many years and was always one to look out for others. As Wilma’s health declined with dementia, he lovingly served and cared for her for many years.

David was known to provide vegetables from his garden to many family and friends over the years. He had a great interest in health and wellness and exercised almost daily at Gold’s Gym in Lethbridge. He also had a real interest in economics and was free with advice to anyone willing to listen.

He is survived by his children: Mark (Michelle), Bradley, Deanne (Darren), Randall (Christie), Ritchie (Elizabeth), and Doran (Shyanne), and all his grandchildren and great grandchildren; and by his siblings Bruce, Robert, Barrie, Kathy, and Wally, and many nieces and nephews. He was predeceased by his wife, Wilma, parents, Orzie and Eula, and siblings Elaine and Douglas.

A Memorial Service will be held Saturday, May 11, 2019, at 11:00 a.m., at the Stirling Church of Jesus Christ of Latter-day Saints chapel. Family and friends are invited to visit with David’s children at 10:00 a.m.