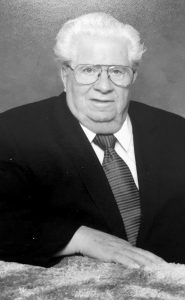 BOYD HOMER JENSEN, 94, of Cardston, Alberta, died peacefully on Saturday, May 11, 2019. He was born on April 8, 1925, in Cardston, as the youngest of seven children of the late James Hyrum and Ellen (Nelly) Woodward Jensen.

For over 50 years, Boyd owned his own farm in southern Alberta. On March 30, 1950, he married Rhea Olsen in the Cardston temple; they were married for 66 years until Rhea’s death on January 6, 2017. Boyd was a lifelong member of the Church of Jesus Christ of Latter-Day Saints and served the church in many callings, including as stake missionary, in the bishopric and as a temple worker. He was a dedicated gardener and enjoyed many artistic pursuits as well, including playing the piano, singing and painting. He was always up for a drive and was well-known for teasing his family. He took immense pride in all of his grandchildren and was particularly pleased that his granddaughter Jennifer Quinton currently serves in the United States Navy.

Boyd was preceded in death by his wife; his parents; his sisters, Cleo Orzula, Juanita and Reva; and his brothers, James Lemont, Dewain and Norman Hyrum.

The Funeral Service will be held on Saturday, May 18 at 11 a.m. at the Church of Jesus Christ of Latter-day Saints in Leavitt, AB under the direction of Bishop Randy Jensen. The family will receive visitors from 9:45 – 10:45 a.m. prior to the service. Interment will follow at Leavitt Cemetery.

The family would like to thank the staff at the Chinook Lodge and at Cardston Hospital for the loving care they provided.