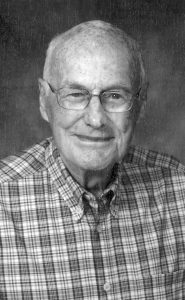 It is with the deepest sadness, but with wonderful memories, that we announce the death of Richard King-Brown on May 2, 2019. He was without a doubt the most wonderful husband, father, grandfather, and great-grandfather a family could have been blessed to have. Richard is survived by his three children Michael (Brenda), Robert (Jenny), and Elaine (Clair) Forestell, six grandchildren (Shannon, Erin, Tara, Megan, Lindsay, and John) and four great-grandchildren (Aiden, Ryker, Emily and Lachlan). He was predeceased by his wife Sylvia, his grandson Stephen, and his step-grandson, Michael. Richard was born in London, England, on November 12, 1919. He was a proper Cockney as he was born within the sound of Bow Bells and was always proud of the fact he was born and raised a Londoner. He enjoyed an interesting childhood growing up in south-east London where his father ran a medical practice. He had one older sister, Honor, who predeceased him in 1987. Richard received his education mainly in London and graduated from the City of London School in 1937. That same year he was accepted at St. Thomas’ Hospital Medical School in London, following in the medical footsteps of his father and grandfather. He was in medical school throughout the London Blitz and graduated in 1942. After medical school and a short internship, he joined the Royal Army Medical Corps (RAMC). His first few months in the RAMC were spent in an army hospital near Hull and this is when he met his future wife, Sylvia Dunn. During his four years in RAMC he saw service in Britain, Palestine, North Africa, Italy, India and the Far East, ending the war in Malaya. Before his travels to the Far East, he returned home to take a blood transfusion course and found time to get married on February 2, 1944. Leaving behind his new wife, expecting their first child, he was not to return for 18 months, arriving home on his son Michael’s first birthday in 1946. For the next six years, he did various house positions as middle and senior registrar studying internal medicine. Robert was born in 1949, and shortly after Richard obtained his MRCP qualifying him as an internist. He applied for many consultant positions in England, but it soon became evident the best way to both provide for his family and practice medicine the way he wanted was to emigrate. They chose Alberta, and in 1952 the family arrived in Picture Butte. In 1954 he joined the Campbell Clinic in Lethbridge and he practiced Internal Medicine there for the next 32 years. Elaine was born in 1956 and the family was complete. His career spanned an amazing era in medicine. He always kept up to date with the latest advances (including the first ICU in Lethbridge) and enjoyed his mix of general internal medicine with a busy consultative practice all the while making his patients feel valued and cared for. Richard also enjoyed many a summer weekend racing his Enterprise with the St. Mary’s Sailing Club and was inducted into the Lethbridge Sports Hall of Fame as a builder and athlete for his work in bringing the racquet sport squash into the city. He retired in 1986 after nearly 50 years in medicine. He and Sylvia spent the “Golden Years” of their retirement in Waterton Village enjoying time in Tofino, time with grandchildren, and lives filled with music and reading. He touched the lives of so many people and will be missed greatly by a whole community that remember his name fondly, and by all members of his family. A Memorial Service will be held at 1:00pm on Friday, May 17, 2019 at ST. AUGUSTINE’S ANGLICAN CHURCH, 411 – 11 Street South, Lethbridge, Alberta, with Canon James Robinson officiating. For those who wish, donations may be made in Richard’s name to St. Augustine’s Memorial Fund, 411, 11 Street South, Lethbridge, Alberta T1J 2N9, or to a charity of one’s choice.