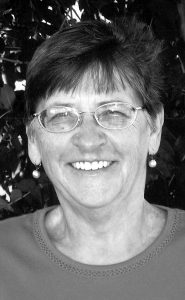 Cora Scholten of Fort Macleod, beloved wife of the late Hank Scholten passed away peacefully, surrounded by family on May 23, 2019 at the age of 77 years. She will be lovingly remembered by her family; daughters Carla Zacharias (Doug), Kathy Vandermeer (Ron); grandchildren Regan Zacharias (Riley), Kalyan Johnson (Chris), Lindsay Zacharias, Cassandra Zacharias, Lauren Zacharias; her brothers and sisters Jackie Wolksi (Ed), Walter Genesis (Karen), Tom Genesis (Truusje), Thelma Maris (Vic), Christine; her brothers and sisters-in-law Herman Scholten, Gerhard Scholten (Dicky), Jo Vanderveen, Dirk Scholten (Huntzen), Riek Scholten, Bill Scholten (Marjan), Diny DeVries (George), Wilma Kuipers, Ina Stronks (Dick), Roelof Scholten (Diny), Sylvia Scholten and numerous nieces, nephews and extended family. Cora was predeceased by her parents and a sister. Cora was an avid sewer, quilter, volunteer in the community, and she gave freely of her time and talents. Condolences will be held between 7:00 P.M. till 9:00 P.M. on Monday May 27, 2019 at Eden’s Funeral Home (2424 5th Ave, Fort Macleod). A graveside will be held at 11:00 A.M. on Tuesday May 28, 2019 at the Granum Christian Reformed Cemetery followed by a Memorial Service at 1:00 P.M. at The Granum Christian Reformed Church (AB-519 & Range Rd 260). In lieu of flowers, donations may be made to a Local Charity in Cora’s memory.

Condolences may be sent through: www.edensfuneralhome.com