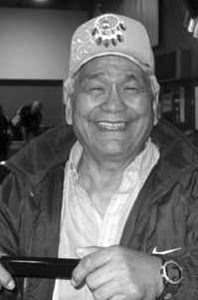 Charlie Moses was born on December 20, 1941 on Sauk-Suiattle Indian Reservation in Washington. Throughout his younger years he was raised by his grandparents in the mountains of Washington, growing up with his siblings and cousins. His grandparents taught him their traditional ways of life. These teachings would later bring him to pursue his traditional path.

Charlie would go on to attend boarding school in the states of Washington. This would bring him to numerous sporting events, sporting awards, and would also push Charlie to further his educational career. This is where he received his degree in Social Work and Counselling. Charlie took advantage of his Educational opportunities as much as possible. His welding talents would bring him employment throughout America and in Southern Alberta. His endeavours would include working on various projects such as the World Trade Centres to working on various welding projects in Southern Alberta that are still being utilized to this day. He was a real go getter, his motto was always “when there is a will, there is a way.” There was no project too small or too large in his eyes. He gave his 200% at everything he put his mind to. Charlie had many artistic abilities which include; drawing, painting, carving, and also pursued his trade certificates.

Charlie’s true passion was playing stickgames throughout Indian country, which took him throughout America and Canada this is where he met the love of his life the late Marilyn Weasel Head. Together they raised Wade, Jolie, Lydia, Sherri and Sheila. Family was the most important thing in his life, he always went above and beyond for his wife, his children, his grandchildren, and his family. His all-time favourite thing was supporting his children and grandchildren in their sports, pow wows and stickgames. Charlie adored his grandchildren and loved to play jokes on them. Charlie supported Marilyn on her spiritual path. He did everything he could to help her at the Sundance, which gave him the opportunity to experience a lifetime at the Sundance. He had the tremendous opportunity to get an understanding of various aspects of the Sundance. Charlie was always respectful of people’s way of prayer and never looked down on a person. He had a kind soul. He loved to travel; he had a big heart. Because of his friendly, joking ways, this opened the door for Charlie make many friends and family throughout Indian Country. He will be sadly missed by everyone he knew and loved.

He is also survived by: his uncle Neil Moses and numerous relatives from Washington. His Sister-in-Laws: Randa (Danny) W.H, Brenda (Tina) W.H. The Weasel Head Family, The Plume Family, The Many Bears Family, The Mcdougall Family and The Day Rider Family, Milton and Dina Nomee and Family and The Nick Family.

We would like to apologize for not going into great detail with names, as our father had a generous heart. We understand he had numerous family and friends and we did not want to leave any names out. Thank you for loving our dad!!