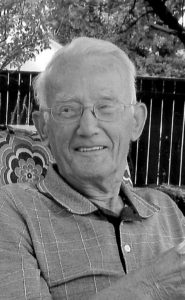 Thies (Tim) Bouwsema was born in the Netherlands on August 9, 1930 and lived there until age 18, when he emigrated to Canada. He passed into his home in heaven in Lethbridge, Alberta on June 24, 2019 at the age of 88 years.

Tim’s early years were spent helping on the family dairy farm and spending time at the local auto service station in the Netherlands. Those vocations continued throughout his life in Canada. He worked on the family grain farm in Nobleford, Canada at times throughout his life. He also pursued automotive by graduation from SAIT as a young man, being employed at Smith Motors in Lethbridge, and owning Subway Gas and Oil (now Subway Automotive Services). The family succession plan for Subway Automotive Services is now in the third generation of Bouwsema automotive mechanics.

Tim was predeceased by his parents Harm and Angenietje Bouwsema; sister Annie van Bolhuis; in-laws Harry van Bolhuis and Wouter Koning. He is survived by his sister Tina Koning in France; brother Ed (Sylvia) Bouwsema of the USA; as well as numerous nephews and nieces in France and the Netherlands.

Family and Friends are invited to a meet and greet at 7:00pm on Thursday, June 27, 2019 at MARANATHA CHRISTIAN REFORMED CHURCH.

A Private Family graveside service was held in the Mountain View Cemetery.