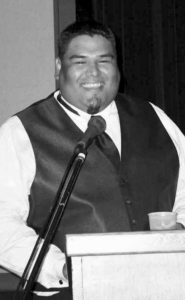 On August 2, 1979, Kyle came into this world in a huge treasure chest, weighing 8 pounds. His parents were in awe, older sister Sharla and brother Trevor embraced him excitedly with a Shetland pony and a tricycle!

Kyle was an exceptional and proud single father. On January 3, 2009 his son Zachary, was born. Kyle beamed from ear to ear! He was a devoted father as he had his son playing hockey locally as well as in the Treaty 7 and Provincial playoffs. The hockey trips were father and son quality time, Kyle and Zack were inseparable.

At the young age of three Kyle dreamed of being a bronc rider and set up a chute (with kitchen cupboard doors) Grandma Margaret would open the gate as he yelled “outside” however Grandma misinterpreted it as “Edoss” thereafter he was known as Edoss.

Kyle had strong faith in his spirituality and had attended ceremonies such as sweats on a regular basis. Throughout his elementary and junior high years, Kyle played minor hockey with the Blood Reserve, Fort Macleod, and Cardston communities. After he graduated from Cardston High School in 1997, a year later he enrolled into the Lethbridge Community College in the Criminal Justice program. Kyle was a lifelong Hurricanes Fan however he was more dedicated to the Kainai Braves Hockey Club as their Coach/Manager. Kyle began his career with the Blood Tribe Youth Ranch as a Child Care Counsellor and the Kainai Corrections Society as a Correctional Officer. At the time of his passing he was employed as a Youth Addictions Counsellor at the Blood Tribe Youth Wellness Centre under the umbrella of Kainaiwa Children’s Services located on the Blood Reserve. Kyle was known for his practical jokes by his co-workers who were like family. Kyle was also known for his sense of humor, greeting you with a hug, and he would always leave you with an optimistic outlook at the end of your visit. Kyle worked with high risk children at the BT Youth Wellness Centre at a National level. He recognized that all youth have strengths to build on and that they had demonstrated resilience. Kyle’s approach in working with the children was being anti- oppressive, responsive, flexible and harm-reducing. Above all he had patience and understanding to build relationships and a rapport with the youth which is key in healing. These traits made Kyle an asset to the BT Youth Wellness Centre.

Kyle AKOHKO’YINIMAAN (Owns Many Pipes) is making that inevitable Spiritual Journey with our Creator and his family invite you to a celebration of his life at the Wake Service which will be held at the Senator Gladstone Hall on the Blood Reserve on Wednesday, June 26, 2019 from 7pm to 11pm. The Funeral Service will be held at the St. Paul’s Anglican Church on the Blood Reserve, Thursday, June 27, 2019 at 11:00 a.m. with Canon Allan McCuaig and Bishop Sidney Black Officiating. Interment in St. Paul’s Cemetery, Blood Reserve. Feast to follow at the South Hill Chapel in Cardston. In lieu of flowers donations can be made in Kyle’s memory to the Heart foundation or the Diabetes foundation.