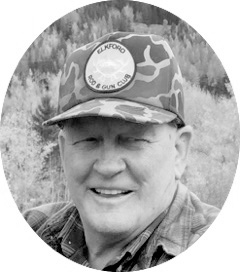 After a long battle with cancer Donald LaRoy Anderson passed peacefully on June 13th, 2019 at the age of 77. Don was a generous, kind and gentle soul. He became an avid outdoorsman at an early age while growing up in Southern Alberta. Don moved to Elkford in 1979 and then to Sparwood where he continued to enjoy golfing and the outdoors. Don is survived by his children Barb Dodds (Perry), Randy Anderson (Kathleen), Kevin (Renee) Anderson, Jodi (Mike) Saad, his partner Mary Taylor and her children Donna (Frank) Leskosek, David (Sheri) Taylor, Shelly (Terry) Hume, Garry (Char) Taylor, as well as many grandchildren, great-grandchildren and his brother Allan (Bev) Anderson. He was predeceased by his parents Alice and Richard Anderson and his nephew Doug Anderson. A celebration of life will be held for Don on Friday, July 5 from 1-4 pm at the Sparwood Senior Drop-In Centre. In lieu of flowers, donations can be made to the Sparwood Food Bank or the Parkinson Society British Columbia.