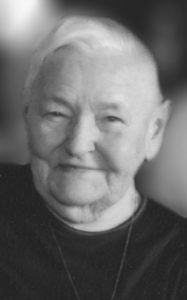 Grief and sadness fill us once again as we announce the passing of our beautiful ‘Mother Elizabeth’, ten days after the death of her eldest son Joe.

The pain a mother endures in losing a child is an experience one should never have to have. Watching that pain and her will to live, subside by the day, was tremendously hard. She cried and cried and asked, ‘why wasn’t I taken first, why my son?’ Our mother dwelled on this to the moment she took her last breath. She was surrounded by her family, sending her off on her eternal journey with words of love and peace on Sunday, June 30th, two days after attending Joe’s funeral.

Those were tough times in Hungary raising two children. Communism brought many hardships on the Hungarian people. Mistrust in your fellow man, degradation, segregation, using food stamps, ration lines and shortages of virtually everything including staples like bread, milk, fruit, meat and more. Our family escaped during the Hungarian Revolution, made it to Austria and then were accepted to Canada as Immigrants, sailed the Atlantic Ocean and arrived at Pier 21, Halifax Nova Scotia on March 23rd, 1957.

The family arrived in Southern Alberta soon after and worked on sugar beet farms. Lethbridge became our permanent home in 1959. Mom started working at St. Michael’s Hospital in the house keeping department for the Sisters of St. Martha. Many of the Sisters became lifelong friends and still keep in touch by mail from their Mother House in Antigonish, Nova Scotia.

After sharing a hardworking and wonderful life, raising two sons, Mom and Dad retired early enough to enjoy 26 years of retired life together before Dad passed away at 88 years old in October 2001. Mom survived that heartbreak to live another 18 years, reaching the grand age of 98.

From the time we told Mom of Joe’s death her life became filled with tears and mourning. Our conversations always lead back to… This is not fair… Why not me instead of Joe? Mom had reached the point of no longer having a will to live, losing her beautiful smile and laughter, her spirit was broken. Mom died, not of old age, but of a broken heart…She was our Matriarch! All who knew her were very fortunate to be touched by the spirit of a true angel. Mom showed and brought out love, devotion, understanding and compassion from virtually everyone she met. She gave and shared more than she ever took. Mom was always ready to welcome, hug, kiss, laugh, endear to whomever crossed the threshold of their simple but beautiful home. She would busy herself preparing drinks and food of the highest quality and variety. No one ever left hungry or unsatisfied. Mom rests now with Dad and Joe in eternal life.

You are all in our hearts forever! Left on Earth to carry on, Steve (Maxine) Meszaros, Daughter-in-law Helen, Grandson Chad (Kate) Eggebrecht and their children Owen and Ava, Granddaughter, Jodi (Brent) Merriman, their children, Ethan and Evan, Noel (Blair) Stolz, Ashlyn (Robbie) Gunderson, Jodi and Brent’s grandchildren Morgan and Avery, Granddaughter Heidee Meszaros and her children, Shayla, Hayden and Joey, Granddaughter Erika (Mark) Dubbelboer and their daughters Macey and Elise.

Our adopted family members are too numerous to mention but you all know who you are and in our hearts. A special thank you to those who helped our mom with love, care and attention. Those who especially stand out are Elizabeth’s best friends Magdi and Joe Rabl, Charlie and Teri Rabl, Bea and Rob Niven, Ann, Margaret, and Aniko Ott, and a very special thank you to Maxine, Helen, Jodi, and Heidee who washed her clothes, tended to her hair, and looked after her wellbeing.

Elizabeth was predeceased by her husband Joseph on October 19th, 2001 and her son Joe, June 20th, 2019 and infant great granddaughter Christina December 28, 2006.

Our family would like to thank Drs. Dionne Walsh and Jennifer Kennedy, Sister Josephine of the Sisters of St. Martha and the many staff at St. Therese Villa who lovingly cared for Mother.

A Funeral Mass will be celebrated at 10:00am, Saturday, July 6, 2019 at OUR LADY OF THE ASSUMPTION CATHOLIC CHURCH, 2405 12 Avenue South, Lethbridge, Alberta, with Father Kevin Tumback, celebrant.

A private family Graveside Service will be held at a later date in the Mountain View Cemetery.