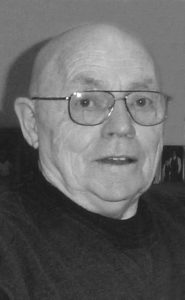 BRYNLY HUGH ROBERTS, beloved husband of 64 years to Carol Roberts, of Lethbridge, passed away at the Chinook Regional Hospital on July 4, 2019 at the age of 86 years.

Dad’s favorite saying was K.I.S.S. (keep it simple stupid), so here it goes. Dad was well known for his stories and he even got a few published. When he was teaching, he would spend summers travelling Canada on his motorbike. He had a quick wit and would tease mom constantly. Dad often said how proud he was of his grandkids. He was more of a “No Fuss – No Muss” kind of guy. Dad will be greatly missed and forever loved.

He was predeceased by his parents Ellen and Hugh and also by all of his siblings. When his last sibling passed away he said that he was finally number one.

As per dad’s request, there will be no Formal Funeral Service. He will be cremated and buried in Didsbury at a later date.

In memory of Dad, donations may be made to a charity of your choice.