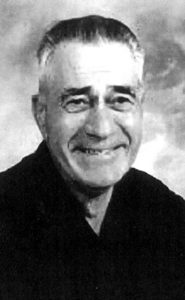 It is with great sadness that we announce the passing of Joe Schoen of Lethbridge, formerly of New Dayton, beloved husband of the late Mrs. RoseMarie Schoen, passed away at Chinook Regional Hospital, on Thursday, July 4, 2019, at the age of 94 years surrounded by his family.

Joe was born in Indian Head Saskatchewan and started his life on a little dairy farm. In 1929 the family moved to a farm east of Warner. At the age of twelve, Joe began his career as a hardworking farm hand and worked for many different farmers gaining the knowledge and skills to support a large family. At age 18 he began driving a school bus for the Lethbridge School District. Joe drove almost 100 miles a day to take the children to and from school. During those days when Joe was done driving the kids to school he worked at a garage during the day. When Joe was laid off from farming, he had to figure out how to make a living, so he set off on a little adventure to the west coast working in one of the largest sawmills. After a year he headed back to Alberta to work with his older brother, Tony farming. He also bought himself a truck and started his own business hauling coal and successfully did that for about four years. During this time, he met the love of his life RoseMarie Drake. They were married in 1951 and in 1952 they inherited the family farm and moved to New Dayton. That is where they lived and raised their six children. They were happily married for 52 years. His beloved RoseMarie passed on March 2, 2004. Till this day Joe fondly remembers how kind heartened and loving his wife was.

He is also endearingly referred to as Poppa Joe by Kache (Jody) Miller family and Richard (Jenna) Ment family.

Flowers are gratefully declined. For those who wish, memorial donations in Joe’s name may be given directly to a charity of one’s choice.