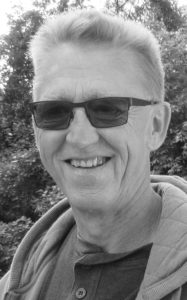 Robert Lynn Williams passed away peacefully on July 4, 2019 surrounded by his family.

Robert was born January 27, 1957 in Claresholm, Alberta. His formative school years were spent in Lethbridge. He completed his education in Winnipeg where the family had relocated then back to Lethbridge a few years later.

Robert was a carpenter by trade; working on many large projects in Alberta, B.C., and Saskatchewan and along with his brother even went to Japan to build houses.

Robert was involved in many sports endeavors throughout his life.

He boxed as a youngster, played hockey, studied karate and in later years was an avid skier, played baseball in Men’s and Mixed League and enjoyed golf.

He was an adventure seeker which led him and his brother Richard to spend time in southern California in early 70s. He then travelled to Europe for 3 months with his best friend, Craig.

In more recent times Robert has experienced some health issues that limited some of his activities. But, in true, laid back Robert fashion he took it all in stride and enjoyed his somewhat quieter life with his partner Bonnie, dog Kahlua, and the kittens. Robert was a kind hearted soul who would give you anything and always be there if you needed help.

He loved all animals, loved music and was extremely proud of his sons.

A Memorial Service will be held on July 15 at 1:00 p.m. at Pavan Park. In lieu of flowers, the family asks that you donate to the Kidney Foundation of Alberta.