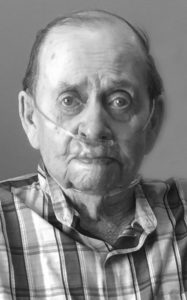 It is with great sadness that we announce the passing of Russell Dickie at the age of 88, after a well fought battle with old age.

Russell was born May 29, 1931 in Kerrobert, Saskatchewan. As a young man he started working for the PFRA in Saskatchewan. In 1951, still with the PFRA, he moved to Vauxhall, where he met the love of his life, Julia Rose Unser. Russell and Julie were married in 1956 and had two children. Russell remained in Vauxhall where he was employed by the town of Vauxhall as the town foreman. In 1978, they moved to Lethbridge and Russell finished out his working days with the County of Lethbridge. Russell retired in 1992 and remained in Lethbridge until his passing.

Russell was a very talented carpenter and enjoyed helping the kids with renovation projects. He had been a resident at St. Therese for the past 3 years.

The family would like to thank everyone for their words of kindness. In accordance with Russell’s request, there will be no funeral.

to send a condolence.