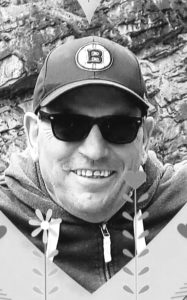 Mr. Wiebren “Wiebe” Zuidema of Lethbridge, beloved husband of Mrs. Verginia Zuidema, passed away at the Chinook Regional Hospital on Wednesday, July 24, 2019, at the age of 60 years.

Wiebe was born on July 25, 1958 in Rotterdam the Netherlands and lived most of his youth in The Hague. He met the love of his life, Verginia, in 1974 in Leiderdorp.

He went to work for Shell tankers and loved it but left because Verginia missed him too much.

They got married in 1974 and moved to Soesterberg where he joined the army. Their first child, Kirsten, was born in December of 1981, and he was so excited that he opened the window and shouted, “I have a daughter!!” from their 3rd floor apartment. They moved around quite a bit and settled in Hellevoetsluis. In December 1986 their son Jordy was born.

Wiebe was an adventurous spirit, who loved to travel. Far wasn’t far enough. He got the opportunity to follow one of his lifelong dreams of driving long haul in North America and moved to Lethbridge in March of 2006. He was a hard and loyal worker and stayed committed to the very end. He was dedicated to his family and went above and beyond to make their lives as easy as possible, often times at his own expense. He loved his grandchildren and taught them to work hard, but most of all to make sure they are happy.

Streets alive had a special place in his heart, and when he was able, he loved donating his time and resources.

Wiebe was addicted to shoes and sunglasses. He couldn’t pass a store without spending at least 30 minutes there. He loved camping and playing golf, and a good discussion where he would encourage people to think outside of the box.

He was the first one to admit he wasn’t perfect, but he tried to live a godly life by looking at Romans 5:8 But God demonstrated his own love for us in this: While we were still sinners Christ died for us.

A Funeral Service will be held at 11:00am, on Wednesday, July 31, 2019 at Evangelical Free Church Lethbridge, 4717 24 Ave S, Lethbridge, Alberta, with Pastor Jeremy Light, officiating.

For those who wish, memorial donations may be made in Weibe’s name to Streets Alive Mission Lethbridge, 323 4 St S, Lethbridge, AB T1J 1Z9.