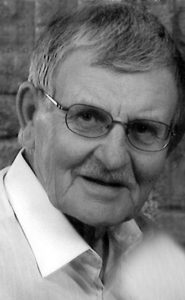 Bill Kaval of Coaldale, beloved husband of Elsie Kaval, passed away peacefully on July 27, 2019, at the Coaldale Health Centre at the age of 87 years. He is celebrated as a Husband, Father, Father-In-Law, Grandfather, Great Grandfather, Brother-In-Law, and Friend. Bill was born at the Galt Hospital in Lethbridge, on October 26, 1931, to William and Magdalena Kaval. He attended Readymade School, later attending SAIT earning his Licensed Mechanic Certificate working at Fred King Motors until 1962. Bill and Elsie then moved to the family farm and began the lifelong career of farming. After retiring, Bill and Elsie moved to Coaldale and spent many summer days at Lee Lake or at the Boat Club in Cowley. Bill loved golfing, curling, camping, hunting and fishing. He was one of the original founders of the Indian Hill Golf Course in Readymade, working alongside many of the other farmers in the area to create the golf course and club house. Bill is survived by his loving wife Elsie of 63 years; son Joe (Marie) Kaval; daughter Dorothy (Rick) Siemens; grandchildren Trish (Loren) Lybbert, Jason (Katie) Siemens, Crystal (Tony) Gagnon, Brian (Karry Lynn) Kaval; great grandchildren Marin and Rylee Lybbert, Justin, Owen and Emily Siemens, Harper and Hazel Kaval; sisters in-law and brother in-law Dorothy (Clyde) Matheson, Jackie Evans, Eunice David and their families. Bill is predeceased by his parents William and Magdalena Kaval; parents in-law Joseph and Dorothy Evans; brothers in-law Ken David and Percy Evans. Special thanks to Dr. Jeffrey Steed and the staff at the Coaldale Health Centre for the excellent care Bill received. A Funeral Service will be held at 2:00pm, on Wednesday, July 31, 2019 at MARTIN BROTHERS RIVERVIEW CHAPEL, 610 – 4 Street South, Lethbridge, Alberta. Interment will follow in the Mountain View Cemetery. Flowers are gratefully declined. For those who wish, memorial donations can be made in Bill’s name to the Alzheimer Society of Alberta and Northwest Territories, 10430 61 Avenue NW #306, Edmonton, Alberta, T6H 2J3, or the Coaldale Health Centre, 2100 11th Street, Coaldale, Alberta, T1M 1L2.