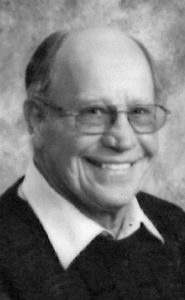 Vernon Murray Meek of Lethbridge, beloved husband of Dora (Goller) Meek, passed away peacefully on July 22, 2019 at the age of 86 years. Besides his loving wife of 63 years, Vern is survived by his son Terry (Cheryl Bernard) of Calgary; daughter Andrea (Geoff) Cox of Lethbridge; daughters-in-law Marie of High River and Yolanda of Yuma Colorado; thirteen grandchildren Kevin (Holly), Teresa (Tyler), Darren (Blayne), Andrew (Brianna), Matthew (Kasey), Justin (Lisa), Evan, Connor, Jared (Jai me) Cox, Kennedy (Dave) Cox, Courtney (Dillan) Cox, Shannon (Andrew) Lanigan, Jody (Kristi) Osmond; sister Shirley Jeffries, sisters-in-law Thelma and Patricia Meek, as well as 17 great grandchildren. Vern was predeceased by his sons Brian and Greg; parents Edith and Stan Meek; brothers Ron and Ken and sister Marilyn Hurd. Vern was born in Nipawin, Saskatchewan, on January 1, 1933 to Stanley and Edith Meek. He graduated from Nipawin High School in 1951, and from the School of Agriculture in Saskatoon in 1953, then went farming in The Pas, MB for a few years. Vern worked as a butcher in Tompkins, SK, where he met the love of his life, Dora. They purchased a dry-cleaning plant in Gull Lake but after severely breaking his ankle he decided a career change was due and enrolled at the University of Saskatchewan, graduating with Distinction in Civil Engineering. He did so while working and helping raise their two oldest sons, Brian and Greg. Vern began work as a design engineer at the Bridge Branch of the department of highways in Regina, then in 1964 he took a position as a design engineer with Con-Force. Vern and Dora added two more children to their family (Terry and Andrea) during this time. The family then transferred with Con-Force to Edmonton in 1968 and then to Calgary in 1972 to work with Portland Cement as their Southern Alberta Field Engineer. By 1974, yearning for a return to the rural life, Vern and Dora purchased a farm near Acme, AB, building a successful hog and grain operation from 1974-2000. The Annual Meek Family Pig Roast became a much-anticipated event for the neighbors. Vern, Dora and their family enjoyed making many lifelong friends along their journeys. Vern had many interests and was always up for a new challenge or a spirited discussion! He earned his pilots license and purchased a Cessna 4 seater which he flew with much enjoyment. Politics were always a great interest and he ran in the provincial election for the Western Canada Concept Party in 1982. He served as a chairman of the Alberta Pork Board in the 80’s during the “pork wars” and was proud to have participated in negotiating and signing the Tripartite agreement with the Federal Ministers of Agriculture. He participated in the Elks club of Acme, curling, (designed the Acme Curling Rink), baseball umpires of Alberta, coached baseball, played on the Seniors Slow-pitch team, and was a lifetime member of APPEGA. He was a competitive billiards player and was an avid golfer who was proud to have shot lower than his age many times. They sold the farm in 2000, and moved to Lethbridge, wintering in Needles CA, and then in Mesa AZ for over 20 years. They were lucky to have enjoyed travelling to Romania, Australia, Cuba, Dominican Republic, and took the whole family on 3 wonderful vacations to Hawaii, Whitefish and the Mayan Riviera. A Celebration of Life will be held from 2-4pm, on Monday, September 9, 2019, at the LETHBRIDGE COUNTRY CLUB, 101 Country Club Road South, Lethbridge. There will be an opportunity to share your special memories of Vern. Flowers are gratefully declined. For those who wish, memorial donations may be made to the Chinook Regional Hospital ICU, 960 19 St S, Lethbridge, Alberta, T1J 1W5, or Jack Ady Cancer Centre, 960 19 St S, Lethbridge, Alberta, T1J 1W5.

One Condolence for “MEEK, Vernon”