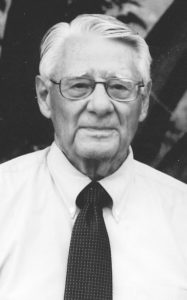 After a very brief stay at the Chinook Regional Hospital, Lawrence Fredrick Turner, peacefully passed from this life on July 29, 2019 at the age of 90 years. Lawrence is the beloved husband of Norma Dahl Turner.

Lawrence was born on August 30, 1928 in Magrath, Alberta. He was the oldest child of George and Thelma. Magrath was home to Lawrence and his sister Janet until August 1945 when the family relocated to Raymond. He graduated from Raymond High School on May 2, 1949 and went on to serve a full time mission in the South Carolina area, for The Church of Jesus Christ of Latter-day Saints. After his mission, he began his university education and continued on to earn a Master’s Degree. Later in life Lawrence served another mission with his beloved Norma, in the Halifax, Canada mission.

Lawrence was a longtime resident of Raymond, and Lethbridge, where he was a teacher at Raymond Jr. High, Winston Churchill and LCI. He loved sports and coached girl’s basketball in Lethbridge and Raymond for many years, and for a time he and Norma operated the Waterton Lakes National Park golf course as well as the Raymond Golf Course.

Lawrence was a lifelong member of the Church of Jesus Christ of Latter-day Saints. He actively served in church callings throughout his entire life and had an unwavering testimony of the gospel of Jesus Christ. He leaves behind a legacy of family, faith and service. He will be remembered as an active family historian, with an abiding love for those who went on before him, and those he leaves behind.

Funeral service will be held at The Church of Jesus Christ of Latter-day Saints, TAYLOR STREET CHAPEL (221 N 400W) in Raymond, Alberta on Tuesday, August 6, 2019 at 11:00 a.m. Burial will follow at Temple Hill Cemetery, in Raymond.