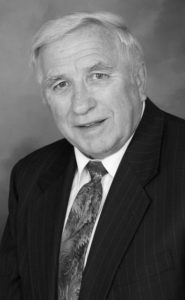 DONALD MACKAY NEWTON, passed away peacefully at his daughter’s home in Sammamish, Washington the evening of July 30, 2019 at the age of 87.

He was born June 23, 1932 in Cardston, Alberta to Lawrence and Virgean Newton, the fifth of nine children. He was sealed in the Cardston LDS Temple on June 17, 1953 to his high school sweetheart, Alofa Colleen Cahoon. She preceded him in death on March 27, 2014. He married Marilyn Johnson on April 23, 2015 in the Oakland LDS Temple.

A child of the Great Depression, he suffered heartbreaking affliction in his early years as poverty and disease took an enormous toll on their family. As a small child, his parents took him, convulsing, to the hospital on their way to their daughter Marilyn’s funeral, wondering if they would soon have another one for Don. When he was 10, the family was separated while the parents recuperated from tuberculosis in a sanitorium. At age 14 he started mixing concrete and carrying the blocks to assist his father in the concrete and bricklaying business. These early experiences indelibly shaped his character, deeply instilling in him the virtues of thrift, industry and an indomitable competitiveness. He marshalled the extraordinary inner strength to overcome these and future challenges with an infectious sense of humor and a nearly boundless optimism. And rather than giving in to bitterness, he channeled these early privations so as to soften his heart. He has thereby always had the unique ability to identify and empathize with the down-trodden and has extended the hand of help and relief to countless people. To many, Don Newton is quite simply the most generous person they have ever known.

Don was a gifted athlete in boxing, track & field and especially basketball. He was named Cardston’s Outstanding Male Athlete of the Second Half Century. His play for the Cardston Cougars high school team led to a basketball scholarship at the University of Alberta. In his playing days he was mentioned or featured in no fewer than 100 newspaper articles, in which he was referred to as “Newt”, “Slick Don Newton”, “Team Quarterback”, or “the Golden Boy”. In 2009 he was inducted into the University of Alberta’s Sports Wall of Fame. After completing his BEd/PE in 1954 at the University of Alberta, he went on to earn an MSc from Brigham Young University in 1957 and an Ed.D. from the University of Northern Colorado in 1969. He taught and coached basketball at Western Canada High School in Calgary 1957-59. The “Redmen” were undefeated in city league play for 3 consecutive seasons, and Provincial Senior A Boys Alberta Champions in 1959. He remained close to the members of that high school team throughout his life, a mentor and friend to each. A team picture hung prominently in his home until the day he died, and he would often speak of them to his family. He later coached at the University of Saskatchewan from 1962-1966 and the University of Calgary from 1967 to 1970. He taught at the University of Calgary and was named Professor Emeritus upon his retirement in 1987. As a professor, he would amaze his students by memorizing each of their names by the second day of class. Throughout his career he was a powerful spokesman for the Canadian Association for Health, Physical Education, and Recreation (CAHPER), serving as national president from 1977 to 1978. He was honored with the Queen’s Medal for Outstanding Service and Leadership in 1977 and the R. Tait McKenzie Medal for Outstanding Service in 1980. He was also a successful business entrepreneur.

Early in life, Don had learned masonry and construction while working alongside his father. As a college student and early in his career, he spent summers building garages and often exceeded his annual teacher’s salary in just 2 months. He single-handedly built a family cabin on a rocky cliff at British Columbia’s Shuswap Lake. And he could be an exacting taskmaster while helping his kids with their home improvement projects. In his later years he moved to Sammamish Washington and enjoyed playing golf, especially with his son Scott. His grandkids enjoyed riding in his golf cart with the license plate, “Golden Boy”. He served as a Water Commissioner there.

Don was a lifelong member of the Church of Jesus Christ of Latter-day Saints. He served in many leadership positions in the church, including priesthood quorum leadership, bishop’s counselor and District President in Saskatoon. He and Colleen served as missionaries at the Church’s Family History Library from 1997 to 1998, where he was famous for wearing his bright “Rush Limbaugh” ties. They also served in the Everett Washington mission as a senior couple encouraging elders to cleaner apartments with “push-up contests”. Most importantly, his life was infused with the doctrines and covenants of the restored gospel which he lived.

Under the guidance of Don and Colleen, the Newton family has always been remarkably close-knit. Together, they had five children: Doneen, Lori, Scott, Nancy and Cheryl (Cherie). By the early 1990s a majority of their children had ended up in the Pacific Northwest, so they left their home in Calgary and moved there to be close to them. Their legacy is reflected in the lives and accomplishments of their children, grandchildren and now even great grandchildren. The afflictions of his early life have been mirrored in its closing chapters. In less than two years Don lost his wife and two beloved children. Colleen passed March 27, 2014. Scott succumbed to cancer April 2, 2015. And Nancy also died of cancer February 4, 2016. Characteristically, Don not only endured these tragedies, but “endured them well,” knowing that they are part of the perfect design of a loving Heavenly Father. His example in adversity is a great gift to his family. He married Marilyn in 2015 and they have had four very happy years together.

Don was preceded in death by his wife Colleen, his children Scott and Nancy, and by his parents, his brother Howard, and sisters Marilyn and Shirley. He is survived by his wife Marilyn; daughters Doneen (Wayne) DeMeester, Lori (Bruce) Salmon, and Cheryl (Michael) Harker; 23 grandchildren and 54 great-grandchildren; siblings Rita Sommerfeldt, Wallace (Norene) Newton, Thea Perrier, Lloyd (Gerry) Newton, and Peggy (Pat) Sloan; together with numerous admiring and loving nieces and nephews.

The Funeral Service will be held at The Church of Jesus Christ of Latter-day Saints, Cardston Alberta West Stake Centre, (846 -1 Ave West), Cardston, AB., on Thursday, August 8th, 2019 at 11:00 a.m. Interment to follow in the Cardston Cemetery. Condolences may be sent to: www.legacyfuneralhome.ca

In lieu of flowers you are invited to donate to the “Coach Don Newton Memorial Scholarship” at the University of Calgary. Go to https://netcommunity.ucalgary.ca/donnewton.