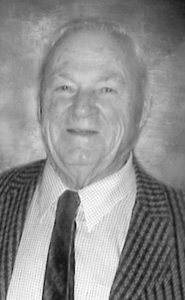 ANDREW “ANDY” YANISH passed away peacefully at St. Therese Villa in Lethbridge, on Monday, August 5, 2019 at the age of 92 years.

Andy was born in Plainview, SK and moved with his family to Edmonton when he was seven years old. A first generation Canadian, he was raised with many of his Polish and Ukrainian traditions, and always enjoyed family gatherings with perogies, beet rolls, cabbage rolls, borscht, and dessert—especially apple pie. At a very young age Andy became interested in mechanics and he reportedly broke many fingers, starting up his vehicles with the old hand crank!

He met his wife, Marie Cochrane, in Edmonton while working as a salesman selling encyclopedias. They were married in 1956 and they lived in Edmonton for nine years, where he worked in the automotive industry. A business opportunity arose in Lethbridge and they relocated there in 1965. He owned several automotive businesses, the most recent being A Y Core Supply in Nobleford, where he reconditioned motors for resale within southern Alberta and the USA. He was a self-taught man, and built a recreational airplane in the early 1970s.

Andy and his family spent many summers camping, fishing and making friends at Moyie Lake and Lake Koocanusa, BC; Flathead Lake and Kalispell, Montana. They always had a boat and one of his favorite activities was trolling for kokanee salmon. His last major project was rebuilding a houseboat when he was 80. Even at the age of 80+, he still enjoyed camping and getting onto the lake in his boat, even sleeping in the tent and cooking fish over the campfire!

He is survived by his son Sam (Jennifer); grandchildren Michael, Madison and Alyssa; sister-in-law Rowena Yanish; plus numerous nieces and nephews in Regina and Strasbourg, SK, and Edmonton and Redwater, AB.

One Condolence for “YANISH, Andrew”