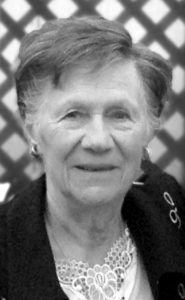 MARIA GRAZIA PALADINO, beloved wife of Tony Paladino, passed away at St. Michael’s Health Centre, on Thursday, August 15, 2019 at the age of 88 years.

She is the loving mother of Nicholas “Nick” (Lynette) Paladino of Lethbridge and Luciana “Lucy” (Brent) Johnson of Lethbridge, as well as grandchild Tate Anthony (Kimberly) Paladino of Coaldale; and great-grandchildren Kade Russell Paladino and Reeve Rodney Paladino. She is also survived by her sister Tina Bicego of Vancouver and numerous nieces and nephews.

Maria kept her promise to Tony and immigrated to Canada from Civitanova del Sannio, Italy, in June of 1953. They were married one month later and settled in Coaldale, AB. With a growing family, they relocated to Lethbridge in 1961, where they were welcomed by neighbors and new friends alike.

In those early years, while raising two children, Maria worked as a seamstress in local drapery shops. She deeply loved her family and she enjoyed cooking and was an expert at both. She will always be remembered by her generosity, even in the last few months.

Maria was an active member of Our Lady of the Assumption parish, as well as the Romulus and Remus Italian Canadian Club.

A Funeral Mass will be celebrated at OUR LADY OF THE ASSUMPTION CATHOLIC CHURCH, 2405 – 12 Avenue South, Lethbridge, AB on Wednesday, August 21, 2019 at 10:00 A.M. with Father Kevin Tumback celebrating. Interment to follow in Mountain View Cemetery.

Thank you to all the health care staff at St. Michael’s Health Centre for the wonderful and thoughtful care. In memory of Maria, donations may be made to St. Michael’s Foundation, 1400 – 9 Avenue South, Lethbridge, AB, T1J 4V5.