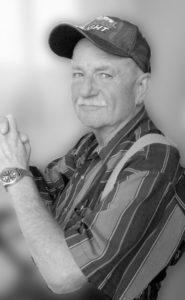 Richard “Rick” Donn Carlson of the village of Warner, beloved husband and best friend of Wanda Carlson, passed away suddenly on August 25, 2019, at the age of 63 years. Rick Carlson was born in Lethbridge on April 26, 1956 to Carl and Katherine “Kay” Carlson of Warner. Rick attended Warner elementary school and graduated there from High School. Rick earned many certificates before and after he attended the Fire Fighting School in Vermillion. Rick has been a Warner and area volunteer Fireman for over 40 years. He moved through the ranks until he became the Fire Chief. Rick maintained that position for 21 years until his passing. Rick was also the president of the Warner Hockey Society Board. He rarely missed a hockey game as he loved watching the girls’ and boys’ teams play hockey. Rick was the “horn man” whenever our teams scored a goal. Rick was employed by the County of Warner for over 40 years, leaving only briefly to help his sister Carol and brother in law Don Hale’s farm roofing and other jobs. Then he worked again roofing for awhile with his brother and best friend Dennis. When Rick returned to the County of Warner, he operated heavy equipment before attaining the position of Parts and Purchasing Agent, which he held until his passing. Rick’s hobbies included Carpentry which he was very skilled at building quality items. After his carpentry was done on Saturdays, Rick enjoyed a few Coors Light beers in his man cave. While he mainly enjoyed listening to blues music, his music interests were varied. Rick was also an avid fan of the Calgary Flames and he and Wanda rarely missed watching the hockey games. Rick had a large collection of hats, jerseys, scale Flames toys and framed pictures of his favorite Calgary Flames players. He took great pride in them all. In his spare time, Rick loved to read his large collection of books. His varied interests were extensive. While Rick was a busy man, he always had time to spend with his wife and family. Besides his loving wife Wanda, Rick is survived by his step daughter Michelle (Ryan) Schwarzenberger and their children Ayden and Jaxen; stepson Rob Ronan and his children, Harley, Bailee and Tristan; sisters Carol (Don) Hale, Betty Carlson and Fern Reide, as well as numerous nieces, nephews and their families. Rick was predeceased by his parents Carl and Kay Carlson; older brother Dennis Carlson, and brother in law Ken Reide. Family and friends are invited to pay their respects at 12:00pm, on Wednesday, August 28, 2019, at MARTIN BROTHERS RIVERVIEW CHAPEL, 610-4 Street South, Lethbridge, Alberta. A Memorial Service will be held at 1:00pm, on Friday, August 30, 2019, at the WARNER CIVIC CENTRE, 508 4 Avenue, Warner, Alberta, with Pastor Jason Carroll, officiating. Flowers are gratefully declined. For those who wish memorial donations may be made to the Warner Volunteer Fire Department, 210-3rd Avenue Warner Alberta, T0K 2L0, or the Heart and Stroke Foundation, 119 14 Street NW, Calgary, AB T2N.

One Condolence for “CARLSON, Richard”